Current Issue Volume No: 4 Issue No: 1

Worldwide, Acquired Immunodeficiency Syndrome (AIDS) accounts for three per cent of deaths in children under five years of age, and six per cent of those in sub-Saharan Africa, where AIDS has become one of the major killers of young children. At least 1600 infants are infected with Human Immunodeficiency Virus (HIV) everyday and more than 600,000 infants are infected by the virus annually. About 90% of these infections occur in developing countries, mainly Sub-Saharan Africa 2.

The primary intervention to reduce MTCT of HIV is antiretroviral treatment for the mother and a short course of antiretroviral drugs for the baby. They also include measures to prevent HIV acquisition in the pregnant woman and appropriate breastfeeding practices. The new Sustainable Development Goals place heightened emphasis on prevention of mother-to-child transmission (PMTCT) in the context of better health for mothers and their children 1.

Most of HIV infected children were from sub-Saharan Africa and mother-to-child transmission during pregnancy, on delivery and during breastfeeding were the major route of infection. It is believed that about two thirds are infected during pregnancy and around the time of delivery, and about one third are infected through breastfeeding. Interventions have reduced MTCT of HIV to less than 2% in high income countries but this rate remains high in resource poor countries ranging between 20% and 45% 3.

From 2014 up to 2017 the health facilities of Musanze District received 698 pregnant women HIV positive. Among these women, 14 children were infected with HIV infection 5. The use of Antiretroviral (ARV) drugs is one of the interventions available to prevent transmission of HIV from mother to child during pregnancy, labor and delivery and breastfeeding. ARV prophylaxis, elective caesarean section (CS) and avoidance of breastfeeding reduced risk of MTCT to less than 2 % 6.

The international recommendations on infant and young child feeding in the context of HIV had been last revised by the World Health Organization 7. Rwanda national protocol of HIV prevention when an HIV pregnant woman is well followed and was shown a good adherence on HIV treatment with Viral Lord suppression, she is supposed at 100% to have a child free from HIV infection 8.

It is recommended that when the pregnant women have been tested HIV positive, she should immediately start the ART. However some women still resisting on starting ART or poor adherence to HIV drugs due to different factors such negative health seeking behavior, lower education level, socio economic condition and cultural aspects 8. Therefore, there was a need to assess prevalence and risk factors of HIV infection among children born from HIV positive women in Musanze district of Rwanda.

The study was retrospective quantitative method was used because this study determined prevalence of HIV infection among children born from mother HIV positive. Retrospective assessed subjects' histories of exposures and outcomes over a specified time period. The study was examined the medical files of both children and women HIV positive in PMTCT period. 15 health centers of Musanze District were included in this study.

The study population composed by the HIV positive pregnant women from conception to 24 months after delivery and their children followed in PMTCT service from birth to 24 months with their final HIV test result. The said populations was from 15 health centers of Musanze District and were 420 children who were in follow up in December 2019 5.

The sample size was 420 children from 15 health centers in Musanze District followed from conception to 24 months after delivery with their final HIV test result. Depending on the objective of this study, all study population was enrolled in the research to better estimate the prevalence.

In collaboration with Nurse working in PMTCT service, medical files of both children in follow up and women HIV positive were founded in service. After finding those files, data collectors were sat together and examined the files both children and mother.

From infant there is age and sex, delivery model, place of delivery, ART prophylaxis, type of nutrition and HIV testing.

Raw data from the instrument tool were entered into SPSS version 22 for analysis. Descriptive statistics was used to tabulate and describe data and bivariate analysis to assess the association between independent and dependent variables were carried out using P-value. The strengths of the associations were determined with multivariate logistic regression. Crude and adjusted odd ratios were estimated with 95% confidence interval. Variables with P-value <0.05 were considered statistically significant.

The introduction letter from Mont Kenya University was deposited to Ruhengeri Referral Hospital for approval of data collection in Health Centers in its catchment area. The Hospital and Health Centers staffs were explained about the benefits of the present study. On the data collection sheet was not provided the patient name. The Health Centers have been guaranteed that the data presentation will not point the name of health facility and the data will be stored confidentially.

Demographic Characteristic of Mother and their Babies 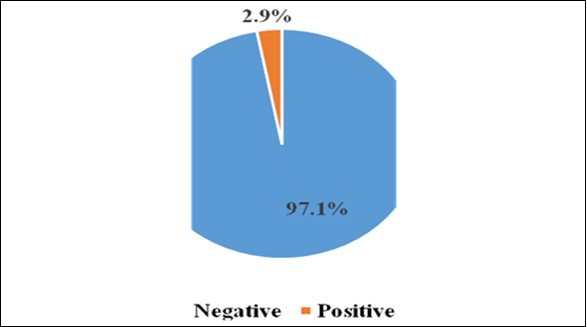 A lower HIV prevalence among children born from HIV mother was observed in Musanze District. In contrast the higher prevalence was reported in the study conducted in Ethiopia. The study conducted in Amhara region, Ethiopia showed that the prevalence of HIV infection among HIV exposed infants was 10.1% 10. In Ethiopia an estimated 1.2 % of pregnant women are living with HIV. Consequently, one of every 3 (33.3%) children born to these women is being infected with HIV 11.

The higher prevalence as also reported in the study conducted in Zimbabwe where mother-to-child HIV transmission is between 15–25%. In Zimbabwe like any other country in sub-Saharan Africa, breastfeeding is the norm with 97% of children reported as ever breastfed 12. In Tanzania, a study showed that, the overall rate of transmission can go up to 20% if an HIV infected mother breastfeeds for 18–24 months 13. Similarly to these findings, a research conduct by Rwanda Biomedical Center in 2018 revealed that the prevalence of HIV transmission from mother to child is 1.56% 8. From 2012, the Government of Rwanda has opted for the WHO option in which all HIV positive pregnant women got engaged in ART regardless of the CD4 count. The process excluded breast feeding protected by ART and women continuing ART as a lifelong treatment. Implementation of WHO option resulted in the reduction of MTCT rate at 18 months. Recent data concluded that MTCT rate dropped to 1.8% in a cohort of exposed infants 9.

Rwanda Government continue to work together with partners to ensure full implementation of national standards for HIV prevention, care and treatment for pregnant women, mothers and their children; and to develop evidence-based strategies and define baselines and indicators that promote the integration of PMTCT into maternal, newborn and child health services, thus strengthening Rwanda health systems.

The prevalence of HIV infection among children born from HIV positive women in Musanze District was 2.9% this is higher compared to national prevalence (1.5%). Factors such as working in private sector, maternal poor adherence to ART, unsuppressed viral load, and lack of ART drug during PMTCT period, lack of ART prophylaxis for the infant, advanced stage of HIV, poor ANC visits were associated with HIV infection among children born from HIV positive mothers. Effective strategies to promote safe infant feeding practices such as, avoidance of mixed feeding beyond 26 weeks among HIV infected mothers are recommended. This study releases some recommendations such as; early introduction of ART for all HIV positive pregnant women; to provide ARVs prophylaxis for all children born from HIV positive women; enhance cancelling on ART treatment in term of increasing good adherence and encourage HIV positive pregnant women to follow antenatal care program.