1Department of Crop Science, College of Agriculture, University of Bahri-Sudan.

The main objective of this study was to investigate the effects of 4 levels of Nitrogen (N) fertilizer (0, 25, 50 and 75 Kg N/fed) on some attributes of Sorghum (Sorghum bicolor L). This study was conducted in the farm of College of Agriculture, University of Bahri-Sudan; during the period 2014-2015. Where the soil is classified as saline with pH ranging from 7.5 -7.8. A randomized completely block designed (RCBD); with 3 replications and four (4) treatments was adopted. All recommended cultural practices were carried out timely. Data; pertaining some plant attributes were collected and analyzed. The result showed that the application of 75KgN/fed has increased both; the average number of leaves as well as the plant height compared to other levels of Nitrogen fertilizer including the control (Figure 1, Figure 2). For the average number of tillers concern, there is non -significant difference between all Nitrogen levels and average number of tillers (Figure 3). The study concluded that the Nitrogen fertilizer has variable effects on the studied agronomic characters, and the application of 75kgN/fed is the optimal level of fertilizer for improving the agronomic traits of Sorghum under Alkadaro conditions.

Sorghum (Sorghum bicolor L. Moench) is an annual self- pollinated crop which belongs to family gramineae (poaecae). It ranks the fifth most important cereal crops in the world. It is grown in the arid, semi-arid, tropical and sub-tropical regions of the world between 40 N and 40 S of equator 1.

This crop is sensitive to low temperature, but tolerates high temperature better than any other cereal crops. Therefore; it is called drought tolerant. Nevertheless, it can be produced on wide range of soil (pH) ranging from 5.0 to 8.5 2, but the production is influenced by various factors, among these, the moisture, temperature, soil type, irrigation water, fertilizers, and soil pH 3.

Sorghum is stable food for millions of people in Africa and India. It is widely used for human consumption; as well as animal feed. The dry stalks are commonly used as fuel for cooking and fencing or roofing huts4. The Sorghum grain also used in manufacturing starch, alcohol and glucose 5.

Sorghum (Sorghum bicolor L.) (Dura in Arabic) is a common source of human food an animal feed in most parts of the world including Africa, Central America, and South Asia6. It is reported that 440,000 kilometers2 were devoted worldwide to Sorghum production in 2004 7. Africa a lone produces about 20 mt of Sorghum per annum, which is equal to one-third of the world production. The major producing countries in Africa are,  Nigeria, Sudan, Ethiopia, Burkina Faso, Mali, Cameroon, Egypt, Niger, Tanzania, Chad, Uganda, and Mozambique 8.

However, one of the problems which facing Sorghum production is the salinity, particularly in the arid, and semi arid regions where evapotransiration increases. Several studies revealed that the presence of broad intra-specific genetic variation in Sorghum varieties for salt stress with respect to their early biomass production 9. He added that high concentration of salinity inhibits and reduce young seedling development, but this depends on the cultivars.

Several studies showed that Nitrogen is the limiting factor for most crops, particularly Sorghum 10. A Study by 11 and 12 showed that sorghum grown as forage crop showed a persistent to salinity. The first stages of growth are decisive for establishment of effective population stand. However, the critical information is not yet available on growth response of this crop to soil salinity stress. Moreover, production potential is an important aspect in agricultural practices, for it reveals the actual yield of particular environment as influenced by agricultural and cultural practices, including fertilization 13. However, more production can be attained through further improvement of cultural practices and management 14. A researcher 15 reported that incorporation of Nitrogen with organic sources into soil may maximize the plant ability to combat the hazard effects caused by irrigation with saline water.

Furthermore, it is reported that increasing soil salinity has different effects on all growth parameters at 14, 70 and 100 days after sowing as well as the yield and its components16.

This study was carried out on the farm of College of Agriculture, University of Bahri- at Alkadaro-Sudan, during the season 2014/2015. After the determination of the area of Interest (AOI) by GPS, a Randomized Completely Block Design (RCBD) was selected. It was arranged in three (3) blocks, each with three (3) replications and (4) treatments. Then the land was prepared by a Tractor (75 HP) (disc plow, leveling and furrowing).

Seeds of Sorghum, cultivar locally known as Wad Ahmed (Son of Ahmed) were sown on ridges 70X30 cm apart in hills; at depths of 4-6 cm on 21/June/2014. The area was immediately irrigated after sowing. Thinning was done two weeks after germination. Frequent interval irrigation of 8-10 days was practiced depending on weather conditions.

The data pertaining the number of leaves per plant, Plant height (cm) and number of tillers per plant were taken at interval of 14 days. The collected data were statistically analyzed. The said data were presented in tables and graphs

The results of data analysis of leaf number, plant height, and number of tillers are presented in Figure 1, Figure 2 and Figure 3.

It is well known that soil salinity has negative effect on plants growth and development through osmotic stress and ion imbalance. This in turn affects the uptake; therefore, the plant physiological processes will be negatively influenced. Consequently, poor yield is expected.

As far as the plant height concern, the results reflected that all treatments positively increased the plant height including the control (Figure 2). All treatments including the control produced similar plant height of 58- 59 cm, which is shorter than plants grown in non saline soil. An experiment conducted in Faisalabad, Pakistan to investigate the effect of four levels of Nitrogen (0, 50, 75 and 100 kg N/acre) on agronomic attributes of Sorghum, revealed the maximum plant height was obtained by application of N4 (100 kg N/acre), produced plant height of 193.92, 195.24 and 192.79 cm in the first, second and the third cuttings respectively, followed by the treatment N3 (75 kg N/acre), produced plant height of 179.70 cm in first cutting, while the second and third cuttings revealed equal plant height (168.62 cm.)18 Furthermore, it is reported that the application of 60 to 240 kg (ha.sup.-1) of Nitrogen fertilizer had increased the plant heights to 269.6 and 320.32 cm, while, the levels of 180 and 240 kg (ha.sup.-1) showed non- significant differences 19.

Figure 2. Effect of different Nitrogen levels on the average plant height (cm) of Sorghum at Alkadaro-Sudan (2014).

Figure 3. Effect of different Nitrogen levels on number of Tillers of Sorghum–Alkadaro-Sudan (2014). 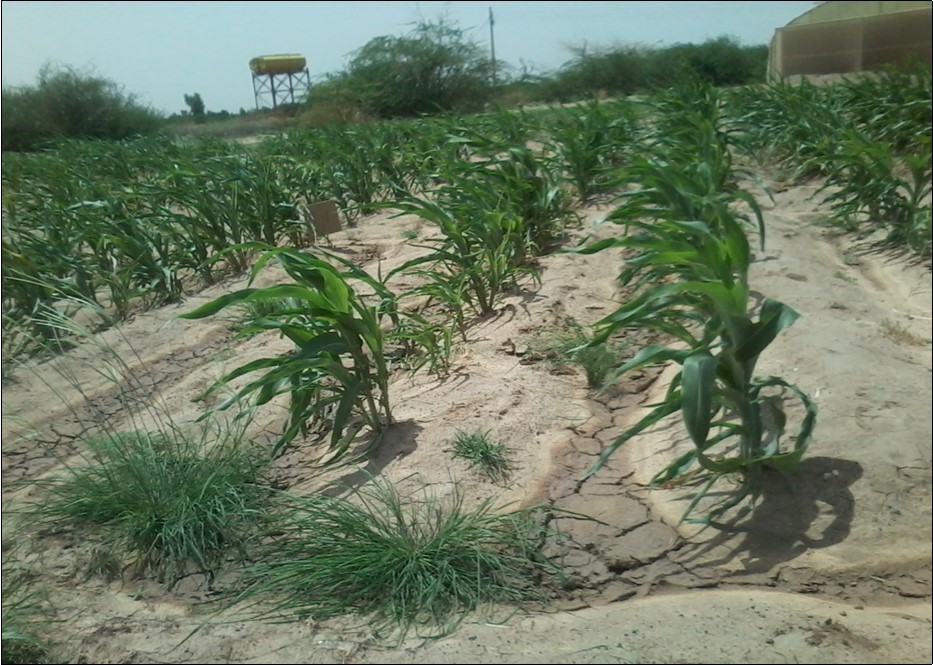 The application of Nitrogen fertilizer to cereal crops in dry-land is vital. It depends on many factors, among these, the soil type, crop genotype, soil pH, environment, etc. In this study, responses of Sorghum (Wad Ahmed) to different levels of Nitrogen fertilizer showed variable results. The application of 75KgN/fed. revealed positive effect on all studied parameters, followed by 50 KgN/fed. and the control. Although, the application of 75KgN/fed. showed an incremental effects on the studied traits, but the obtained measurements for all characters are beyond the expectation. This can be attributed to soil salinity.

Based on the results of this study, the saline soil (pH 7.5-7.8) of Alkadaro area is not suitable for growing Sorghum, particularly the cultivar Wad Ahmed.

For biomass production, 75kg.N/fed. is recommended

Further study is recommended to evaluate the response and performance of different Sorghum cultivars to different types and levels of fertlizers.