Journal of Agronomy and Research

Current Issue Volume No: 3 Issue No: 2

Today; there is an increasing demand for fertilizers due to the intensive and extensive agricultural activity to meet the ever increasing demand for food and fiber by the rapid world population expansion. This study is mainly concern with the Bat Guano which is usually collected from the Caves. This experiment was conducted at the Farm of the College of Agriculture, University of Bahri, Alkadaro, Khartoum North-Sudan during the period from July to November, 2017 with the objective to investigate the efficacy of Bat Guano and Nitrogen fertilizer on growth and yield of Serena and Opera (Helianthusannus, L.) Hybrid Sunflower cultivars. The study was based on split-plot experiment in randomized complete block design (RCBD) with four (4) replications. Data pertaining Plant Height (cm), Leaf Number (LN), Leaf Area (LA), Leaf Area Index (LAI) and Seed Weight (SW) were studied. The said data were analyzed using Statistic 8- software. The results reflected significant increase in plant height (F= 6.05, P < 0.0001, leaf number (F=2.37, P<0.0388), leaf area (F= 7.44, P<0.001), leaf area index (F= 6.53, P < 0.0001) and seed weight of both Sunflower cultivars respectively due to application of Guano and Nitrogen fertilizer compared to the control. It also reflected non-significant difference between all studied traits as application of either Guano or Nitrogen fertilizer. Moreover, all studied characters of the two cultivars have similarly responded to the application of the two types of fertilizers. Further studies are recommended to assess the benefits from the use of Bat Guano as a fertilizer.

Sunflower is one of the most important oil seed crops in the world. It ranks the 4th_ oil seed plants; proceeded by Soybean, Palm oil and Rapeseed plant. The crop isa native of Mexico and Peru. With the European exploration of the New World, the crop spread out to different parts of the world due to its adaptation to wide range of climatic conditions. It can be grown year around under both rain-fed and irrigation agricultural systems 1, 2. The crop has many uses, such as human use (oil, and non-oil seed as snack food), animal feed, green fodder and silage. But few species have economic importance as ornamentals 3.

Nowadays, fertilizers are commonplace, but 200 years ago synthetic fertilizers were rarely used. Farmers were relying on ash, manure, and bones, to supplement soil, but it was not fully understood why such materials were beneficial. However, by the beginning of the 19th_ century, due to extensive use of American farmlands, soil nutrients were exhausted. Farmers began searching for better fertilizers. Then, in the 1840s, Bird Guano appeared in the United States, Due to the increasing demand for Sunflower; yield improvement became an important issue. Cultural practices including fertilization are among the important approaches to increase crop yield. However, chemical and organic fertilizers are applied to increase the yield, but due to high cost of synthetic fertilizers, many farmers, particularly in the third world began to use organic fertilizers which are less cost including Bat Guano 5.

Guano is an accumulated excretion of Birds and Bats which is utilized as natural fertilizer. It has played a pivotal role in agricultural development in Latin America and Oceania 6. Historically, the term Guano originated from the Andes area of South America refers to any form of dung used for crop fertilization 7. The local community of Andes used to collect Guano from islands and the coast of Peru for soil amendment for over 5,000 years 8. The most important producers of Guano are the Guanay cormorant, the Peruvian pelican and the Peruvian booby9. It is stated that Guano is rich in Macro and Micro elements 10. Nevertheless, studies showed that Bird Guano has high levels of nutrients such as  Ammonium and Nitrate. By mass, it is 8–21% nitrogen; the nitrogen content is about 80% uric acid, 7% ammonia, 10% protein, and 0.5% nitrate 11. Some of Bird Guano's most common chemical elements are phosphorus, calcium, and magnesium12.

However, Guano is a multi-functional fertilizer that can be used as a soil conditioner, enriching the soil with NPK and trace minerals, improving soil texture. It also has fungicidal effect when applied to leaves, and a compost activator that speeds up the decomposition process of compost and can also control harmful nematodes in the soil. Moreover, the microbes in Guano fertilizer have been reported to aid with cleansing toxicities from the soil, improving the natural balance without increasing alkaline or acid levels, while providing the soil’s biological system with fast and slow release nutrients. It also claimed that Guano positively enhances the taste of the produce by making the overall flavor sweeter, richer, and less watery 13.

Researchers found that Bat Guano from three different Bat species, the Frugivory (Pteropus rodricensis) family Pteropodidae which feeds on fruits, the Sanguivory (Desmodus rotundus) family Phyllostomidae, feeds on animal blood like cows, horses, and pigs, and Insectivory (Tadaridabrasiliensis), family Molossidae feeds on insects, differ in chemical composition due to their different dietary habits 13, 14. The Insectivorous which feed on different nutrition sources in different habitats had elevated Nitrogen in Organic and dry matter (DM), while the Sanguivorous had elevated Carbon in Organic Matter (OM). Both Insectivorous and Frugivorous had elevated Phosphorus. However, Frugivorous had the greatest Carbon-to-Nitrogen ratio (C/N ratio), while Sanguivorous had the greatest Nitrogen-to-Phosphorus ratio and Carbon-to-Phosphorus ratio 15.

It is reported that the freshly excretion of insectivorous Bat Guano contains several mineral elements like Carbon, Nitrogen, Sulfur, Phosphorus, with  pH ranging from 5.1 to 7.3, tending to be neutral or acidic. Nevertheless, as it ages, and becomes strongly acidic with pH ranging from 2.7 to 4. 16.

Generally, the main aim of this study was to investigate the positive influential effects of Bat Guano on different crop parameters, and find out the possibility of its application as economically sound, socially acceptable and environmentally friend organic fertilizer to increase crop yield and contribute to food security in the face of rapid population increase and exponential raising prices of the synthetic fertilizers.

This experiment was conducted at the Farm of the College of Agriculture, University of Bahri, at Alkadaro, Khartoum State, Sudan. The farm is situated within the latitudes 130 27ˋ-150.45ˋN longitudes 320. 35ˋ- 400.96`E and altitude of 398 m above the sea level. The area lies in semi-arid region, with temperature ranging between 30-450C in the summer and between 10-250C during the winter. The average annual rainfall ranges between 0-100 mm, with relative humidity ranging from 16 to 50 % 17. The soil of the study area is heavy clay with pH 7.5 – 8, thus, it is classified as saline soil.

This experiment was conducted during the summer of 2017, designed as split-plot experiment based on a randomized complete block design (RCBD), with four replications. The land was well prepared, Sunflower seeds of Serena and Opera (H-16-096\0306) cultivars were treated with fungicide, then sown in rows 75X30 cm apart and 30 cm distance between holes Bad Guano powder and Nitrogen fertilizer were applied pre-sowing at the rate of 60 and 50 kg/fed. respectively. Frequent irrigation was practiced every 7-10 days. Weeds were controlled by application of systemic selective herbicide. Samples of the studied plant characters were taken at random. The collected data were analyzed using Statistic 8 software. The results were presented in tables and figures.

The obtained results casted light on studied plant characters and how they were influenced by the application the two types of fertilizers. The results are presented in the following tables and figures followed by discussion.

Figure 1. Impact of Guano and Nitrogen on Plant Height of Serena and Opera cultivars (AlKadaro, 2017) 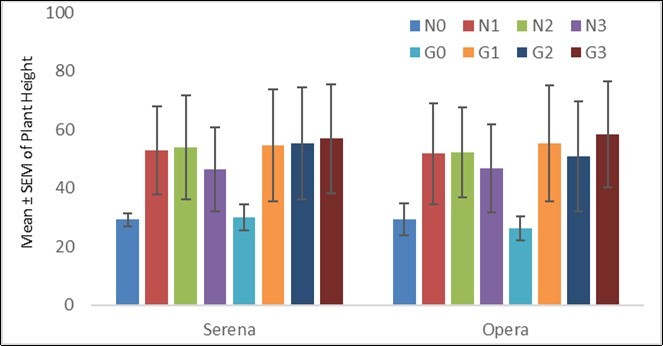 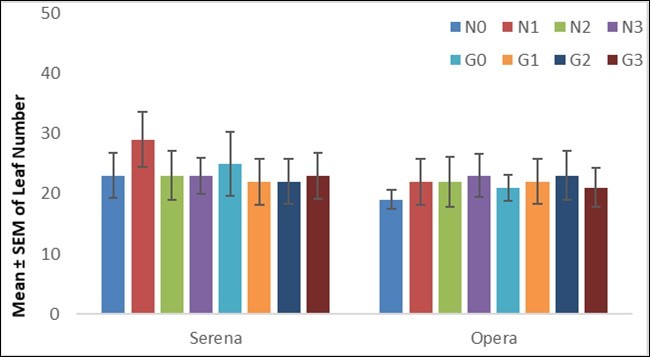 The results in the Table 3 and Figure 3; demonstrated that the overall leaf area of Serena and Opera cultivars has significantly increased in the field experimental units which treated with Guano and Nitrogen compared with untreated units (F= 7.44, P < 0.001). Moreover, the result showed that there is non-significant difference in the leaf area of Serena and Opera cultivars due to application of either Guano or Nitrogen. Furthermore, the two cultivars “Serena and Opera” responded similarly (F= 3.26, P < 0.1687) to Guano and Nitrogen treatments.

Figure 3. Impact of Guano and Nitrogen on Leaf Area of Serena and Opera cultivars (AlKadaro, Sudan, 2017) 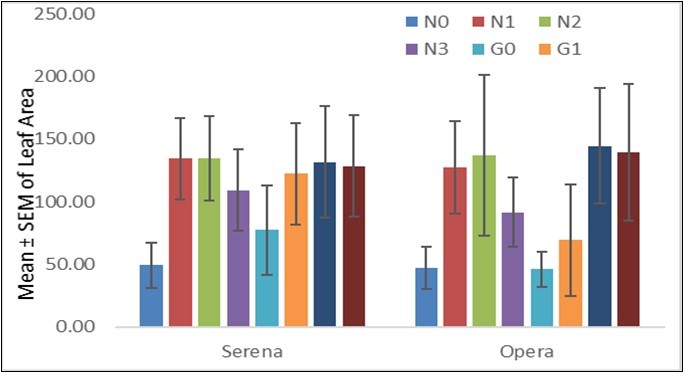 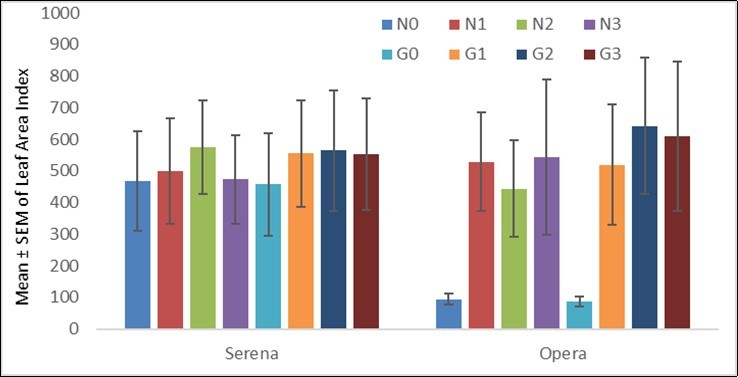 As far as the (1000) Seed Weight concern, the result (Table 5, Table 6 and Figure 5 reflected that application of both Guano and Nitrogen increased the average seed weight of both cultivars. But the two cultivars responded different to Bat Guano and Nitrogen fertilizer. A study conducted in Turkey during 2014-2015 revealed that application of Bat Guano has significantly increased the total yield of lettuce (Lactuca sativa L.) 20. Results of study on Wheat crop demonstrated that Bat Guano proved to be more effective than farmyard manure by increasing thousand grain weight by 6%, number of spikes in m2 by 66%, stem yield by 87%, grain yield by 35%, plant height by 8.4% and hectoliter weight by 5% 22.

Figure 5. Impact of Guano and Nitrogen on Seed Weight of Serena and Opera cultivars (AlKadaro, Sudan, 2017) 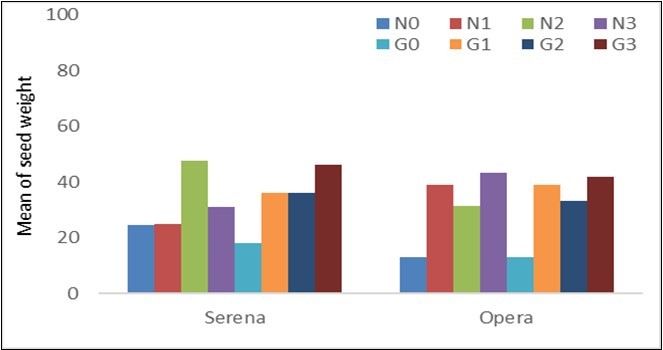 Bat Guano is a multifunctional. It has numerous benefits, among which: Improves soil texture and structure, enriches the soil with macro and micro nutrient elements, acts as a fungicide when applied to leaves, improves the natural balance without increasing alkaline or acid levels, Its application rates are smaller than those of other manure, low to non-existent odor, fast action in the process of decomposition process in comparison to other natural manures. It speeds up the decomposition process of compost matter and can also control harmful nematodes in the soil

Different field and vegetable crops showed positive response to the application of natural organic fertilizer namely the bad Guano as well as the Nitrogen fertilizer.

A shift from application of synthetic to organic fertilizer is a great success towards the organic farming.

Further studies are recommended to assess the benefits from the use of Bat Guano as a fertilizer. 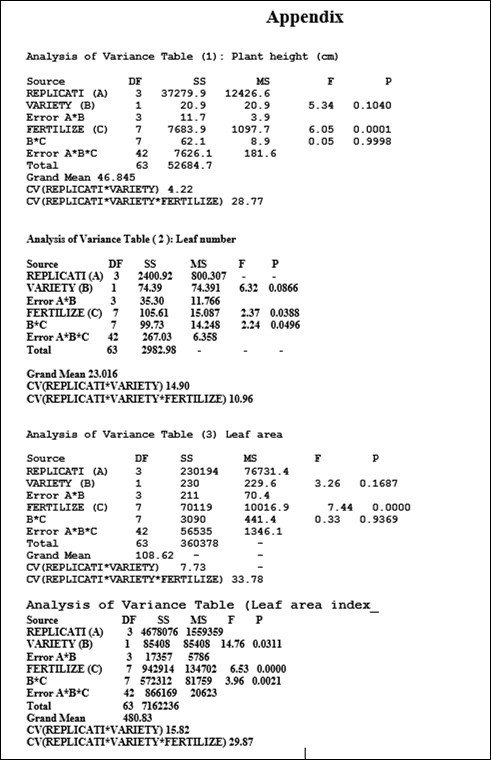