Testing people for COVID-19 in a country like India with a huge population is a near impossible task therefore the government is using body temperature as a testing parameter to cover the whole population. Infrared thermometers are used to find the temperature because it is a cheaper and faster way. This testing rate can be done even faster, without the need of manpower and with far more accuracy using smart watches and bands. These wrist-wearables are mostly used for fitness purposes which have more measuring equipment that is used for preliminary testing done for COVID. This equipment’s are in the form of electric sensors which are small enough to be used in wearables. So we can get even more insight and accuracy compared to the standard method. In this study an application is created to use an array of sensors (Pulse sensor, Pulse oximeter, Accelerometer and temperature sensor) are being used in these wearables to find the chance, that a person is affected due to COVID-19 and the information can be seen real time in mobile phone through the application. All the information can be sent to the health organization’s if required.

“COVID 19” started its roots from Wuhan, China which has changed the world upside down. It has held people captive inside their own houses. All the schools, colleges and companies were closed which eventually triggered a deep economic crisis. Government has announced lockdown to control the pandemic spread 15, but no one knows what’s next? We don’t have an answer. As of June 30, around 500 thousand people lost their lives, 9.6 million people tested positive across the globe1.

According to India’s survey 1, out of the entire tested individual it has been confirmed that around 490 thousand people were affected. Based on the calculation made with current test rate and Indian population it can take more than a decade to test everyone in India. If that’s the case, it would be impossible to stop the spread of COVID 19, until and unless the vaccine is found. The researchers found that weekly surveillance testing, paired with case isolation, would limit an outbreak even if the testing method was less sensitive than quantitative polymerase chain reaction (qPCR)2.

We had always learned new ways to fight and manage such unexpected diseases. Technology cannot prevent the onset of the pandemics; however, it can help prevent the spread, educate, warn, and

Empower those on the ground to be aware of the situation, and noticeably lessen the impact. Today, with converging technologies like mobile, cloud, analytics, robotics, AI/ML, 4G/5G, and high-speed internet, has created several innovative approaches for pandemic response. Governments, Venture Capitalists,

On the other side, almost everyone in the world is using watches, which have been replaced by their smart versions that can come in handy in this situation. According to International Data Corporation (IDC) 5.03 million Smart band and 930 thousand smart watches were shipped to India in 2019 4. These IOT based smart watches and bands are used by people of all age groups. These devices continuously monitor the health/fitness of the user through a temperature sensor, heart rate sensor, accelerometer/gyroscope, etc., and the obtained data can be shared to anyone in the world. Some wrist-wearable devices also come with SpO2 sensors which would be an added advantage because of their blood oxygen level indicating capabilities. If these devices are coupled with suitable algorithms to analyze the data it produces, can increase the rate of identifying affected ones. It would be like a mini test centre tied to the hands of people.

In this study, an application is created especially for the wrist-wearables to measure the chance of a person being affected due to COVID-19. Values from temperature, heart rate and accelerometer/gyroscope sensor can be analyzed and displayed in mobile phones in real time. If the person is suspected then the information can be sent to government health organization. This application can also be coupled with existing researches like cough detection 5 to increase the accuracy of predictions. It can also be used to track the location and interaction of the patient with the surroundings. The main purpose of this application is to ease the process identifying the affected person, to increase the rate of testing for COVID-19 and to stop the spread.

The main materials we use in this study are wrist-wearable devices. The common symptoms for COVID-19 are fever, dry cough and tiredness6. Also the government is assessing people based on their body temperature and blood oxygen level just in order to test the huge population faster and to find the affected person. Since, some of these parameters like fever, tiredness and blood oxygen level can be found by combining results from an array of sensors used in smart watches and bands7. The main sensors which are being used are temperature sensor, optical heart rate sensor, pulse-oximeter and accelerometer.

Heart rate (HR) or pulse is the frequency of cardiac cycles, and is expressed as beats per minute (bpm).HR values for ordinary people is around 60 to 80 beats per minute. The most popular technique for HR measurement is Photoplethysmography (PPG). PPG is the process of using light to measure the blood flow. Wearables with optical heart-rate monitors have small LEDs on their undersides that emits green light into the skin on your wrist. The different wavelengths of light from these optical emitters interact differently with the blood flowing through your wrist. Figure 1. 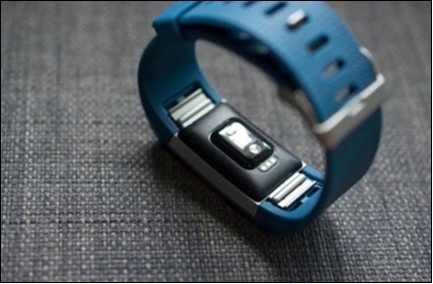 When that light refracts or reflects off your flowing blood, another sensor in the wearable captures that information. That data can then be processed with algorithms to produce understandable pulse readings. Figure 2. 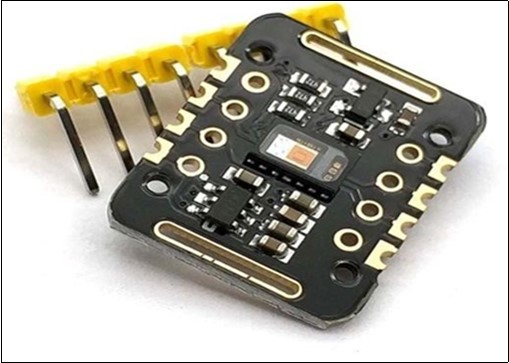 This pulse reading along with values from other sensors can be used to come up with certain predictions. As said before it can be used to find fever since there will be an increase in heart rate or pulse reading with minimum value from the accelerometer. By continuous reading of this value we can find patterns and abnormalities of the respective individual. Figure 3. 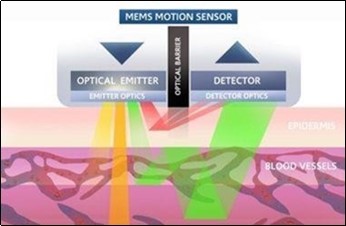 Pulse Oximeter, often called SpO213 sensors on wearables, and are used to measure blood oxygen levels or the saturation of oxygen in your blood. In the medical field, pulse oximeters are usually small devices that resemble a paper clip. They can be attached to a finger, toe, and sometimes an earlobe to painlessly measure blood oxygen levels. Both medical and wearable oximeters use light to do so. The working of pulse oximeters is the same as that of pulse rate sensor but there is a hardware entity difference. A pulse oximeter features two LEDs with different light wavelengths - one red and one infrared. This is because absorption of light differs between blood that has normal levels of oxygen and blood that is lacking oxygen. Oxygenated blood absorbs more infrared light, compared to deoxygenated blood. This allows pulse oximeters to quickly and non-invasively detect oxygen levels 8. SpO2 is supported in only certain wearables, so it can be an added advantage and it can also be used to measure heart rate. Figure 4. 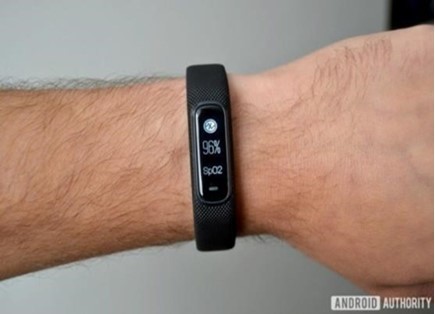 It is usually calculated in percentage. A patient affected by COVID-19 has very low blood oxygen levels, whereas for a non-affected person the value oxygen level in blood is 95%. 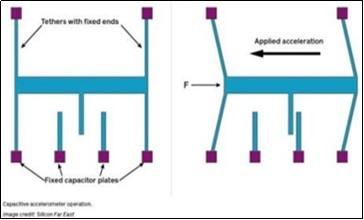 It measures acceleration by measuring the change in capacitance. The mass is attached to springs that allow it to move along one direction. When the band is subject to acceleration due to motion or gravity, the moving plates change their position between the fixed plates (they together act as a capacitor) and therefore the capacitance between them changes. The change in capacitance between the plates is measured and used to estimate the acceleration. This is the working of single axis accelerometer which is similar to three axes meter where the mass can move in all direction and plates are fixed in all three dimensions. By measuring the amount of acceleration due to gravity, an accelerometer can figure out the angle it is tilted at with respect to the earth. By sensing the amount of dynamic acceleration, the accelerometer can find out how fast and in what direction the device is moving. As said before using the accelerometer value the movement and activity of the person can be measured and it can be used indirectly to measure the sleep cycle, tiredness and heart rate at rest, etc., when combined with other sensors. Figure 6. 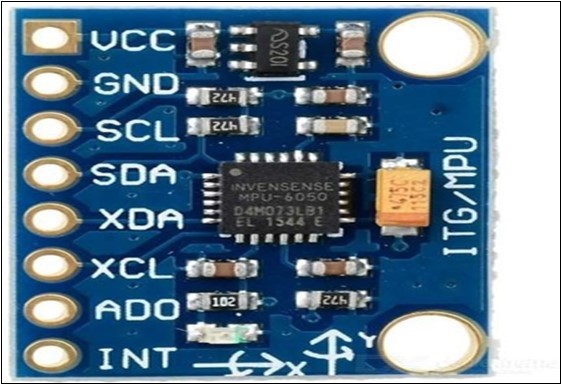 The systems predicting sleep cycle, abnormal heart rate or pulse rate, low blood oxygen level, fall detection are all already implemented in the wrist-wearable devices9, in this application we are using them to find weather a person is affected by COVID-19 by comparing the person’s vital states with the symptoms of COVID10.

Wrist-wearables are designed to continuously check the health of the person wearing it. The systems which predict sleep cycle, abnormal heart rate or pulse rate, low blood oxygen level, fall detection are already implemented in wrist wearables. In this application we are using the outputs from these pre built systems as shown in the diagram. These systems are combinations of above mentioned sensors and algorithms to combine the outputs to predict any abnormality in heath. Abnormalities in health are found by comparing current data with previous day’s data. Whenever there is an abnormality the corresponding system returns a true value. To find the patient the outputs are compared with symptoms of COVID. Figure 7, Figure 8. 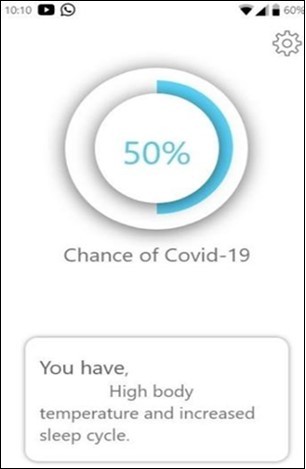 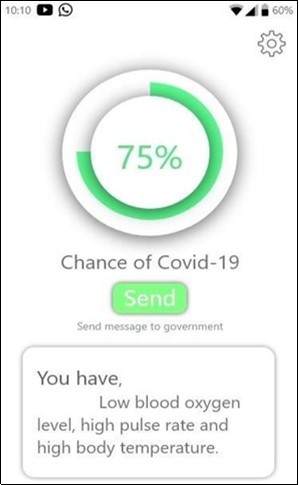 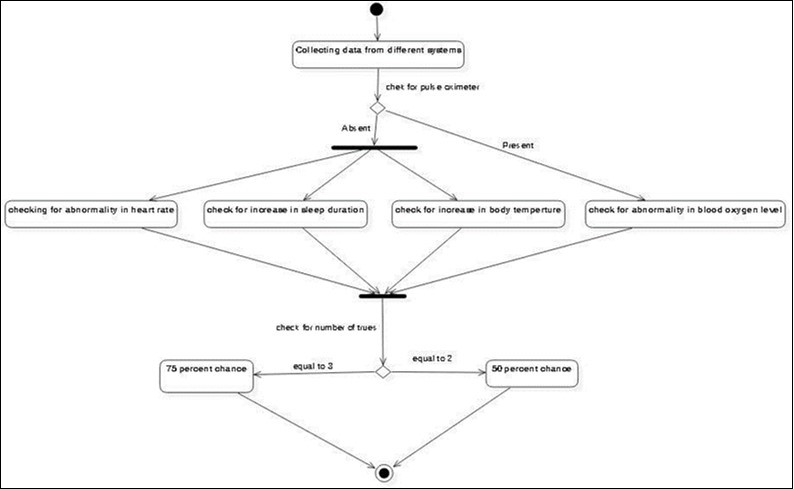 Here drop in blood oxygen level is an important one. Therefore the output from pulse oximeters plays a major part in increasing the accuracy. But we can also predict COVID with other sensors too. According to this application, if the outputs from any two systems show true, then there is 50 % chance of COVID. And if the output from more than two systems is true, then the chance is 75%, so he or she should definitely take a COVID-19 test. Therefore the information can be sent to government health organization. 100 % accuracy cannot even be achieved in medical COVID-19 test16, here in wearable that’s because of the errors produced in each system. The results of the test can be monitored by mobile phone, thanks to IoT technology.

This application is tested with hardware similar to wrist wearables. Figure 9, Figure 10. 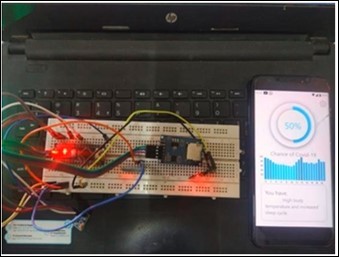 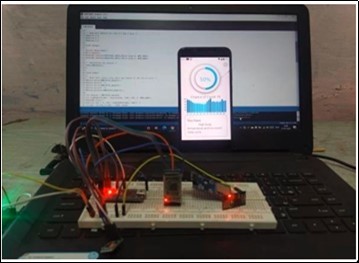 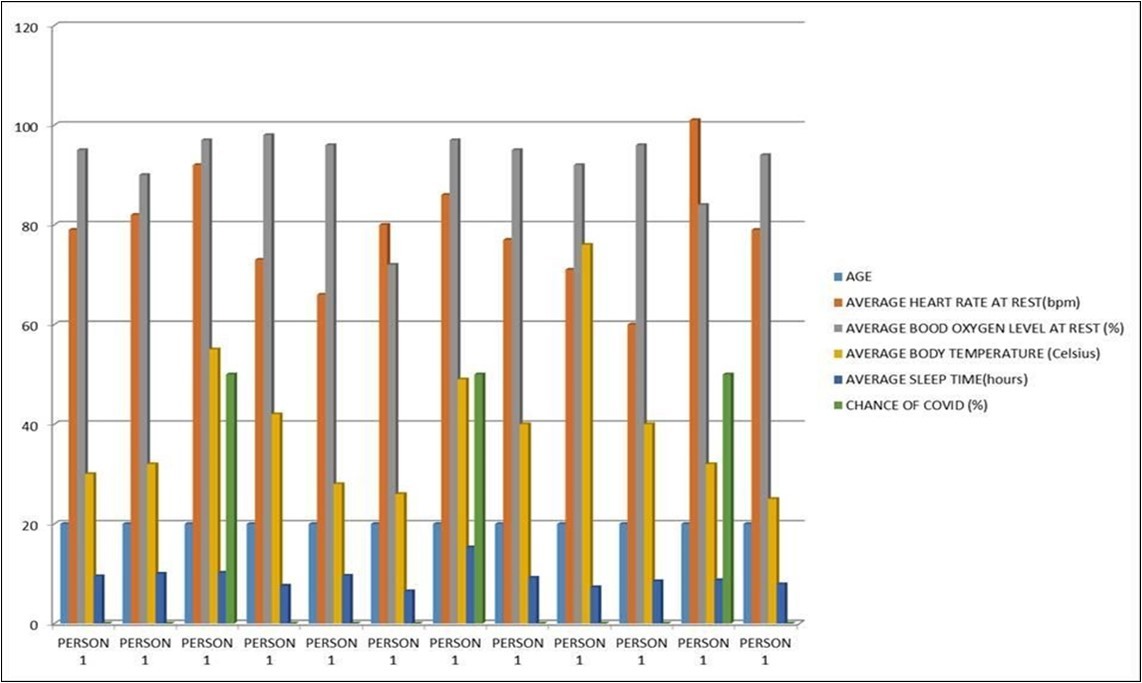 Wearable technology has proven to have a lot more potential than entertaining the customers 15. Their cheaper cost made a huge population opt for smart wearable instead of traditional ones. So using them in this kind of pandemic will be helpful. Still many advance technology are been added to the existing one and many medical testing equipment are made small and accurate for the consumer centric market. Who knows, Soon it may replace hospitals. The hospital may be tied to the hands of people.

This pandemic has forced us to find a new and advanced approach for our day today works and also made us realize a lot. It has changed the world both in positive as well as in negative side. We humans should keep the positive ones with us and change back the negatives. This COVID has opened up many new possible ways for the flow of technology. As always we humans find solutions for all the problems that we face, thanks to the rapidly growing technology which always helps to find solutions.

As of now we have found temporary solutions, but still many researches are going on to find the perfect one for COVID-19, soon we will end up with one that brings us together for the normal lives we had before.