Exercise-dependent complete left bundle branch block is a rare entity.We present a case in which this phenomenon was demonstrated during the recovery period of a stress test. To the best of our knowledge such an observation has not been previously described.

A 56 year-old male with history of hypertension, hyperlipidemia, and diabetes mellitus was referred for an exercise stress test due to atypical chest pain. His medication included metformin, simvastatin and enalapril. His baseline electrocardiogram at rest was normal (Figure 1). He exercised for 10:02 minutes on a Bruce protocol, achieving 11.8 METS. The exercise was discontinued at a maximal heart rate of 142 beats per minute (bpm), (87% of his maximal predicted heart rate). After 0:12 minutes of recovery, at a heart rate of 138 bpm, complete left bundle branch block (CLBBB) developed (Figure 2 and Figure 3), which resolved after about two minutes (Figure 4). The patient was asymptomatic throughout the test, and there was no evidence of ischemic ST-T changes. Because of the appearance of CLBBB during the recovery period, he was referred for rest and stress echocardiography, which were both found to be normal. 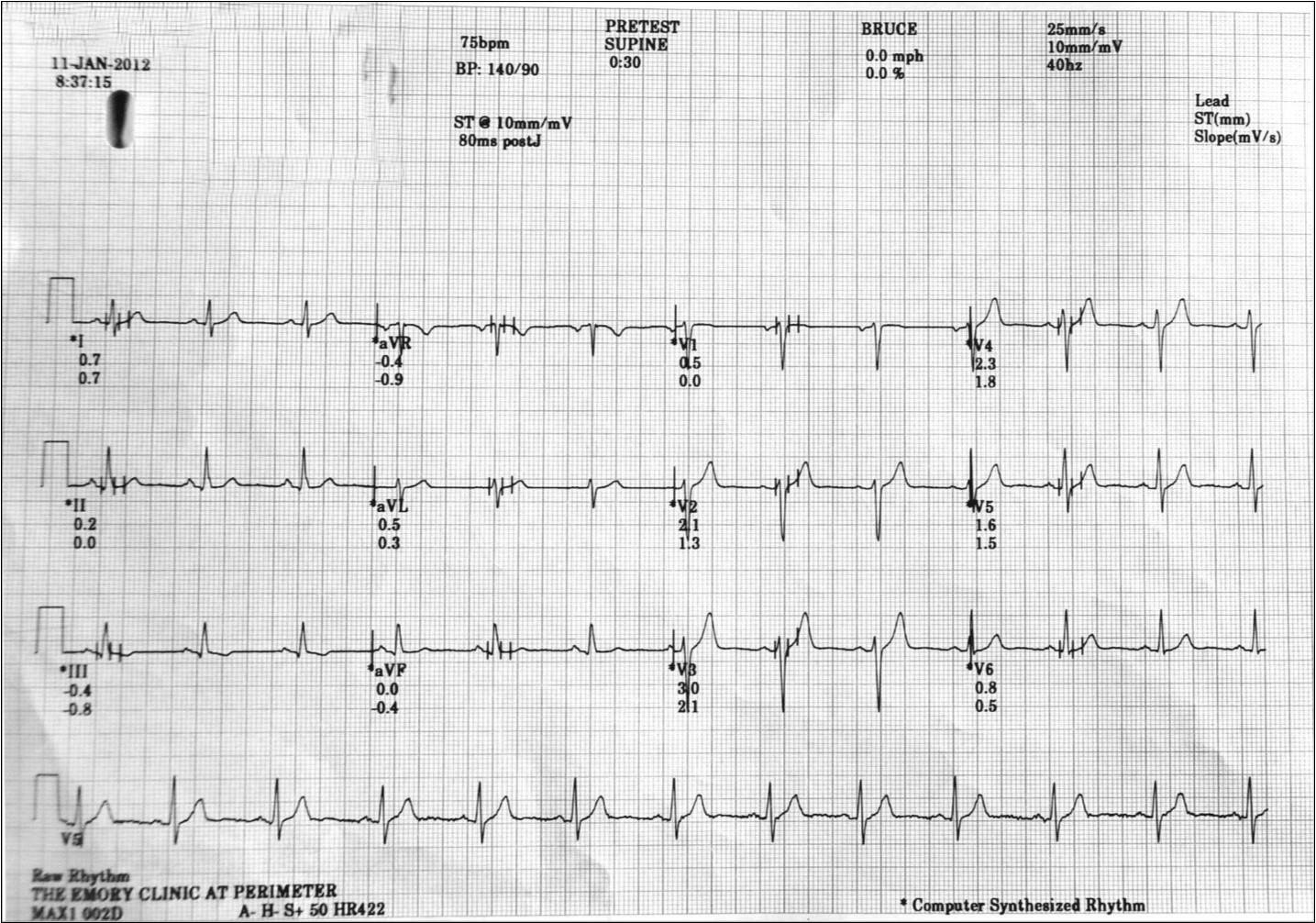 Figure 2. LBBB appeared at a heart rate of 138 bpm, during the initial phase of the recovery period of the stress test. 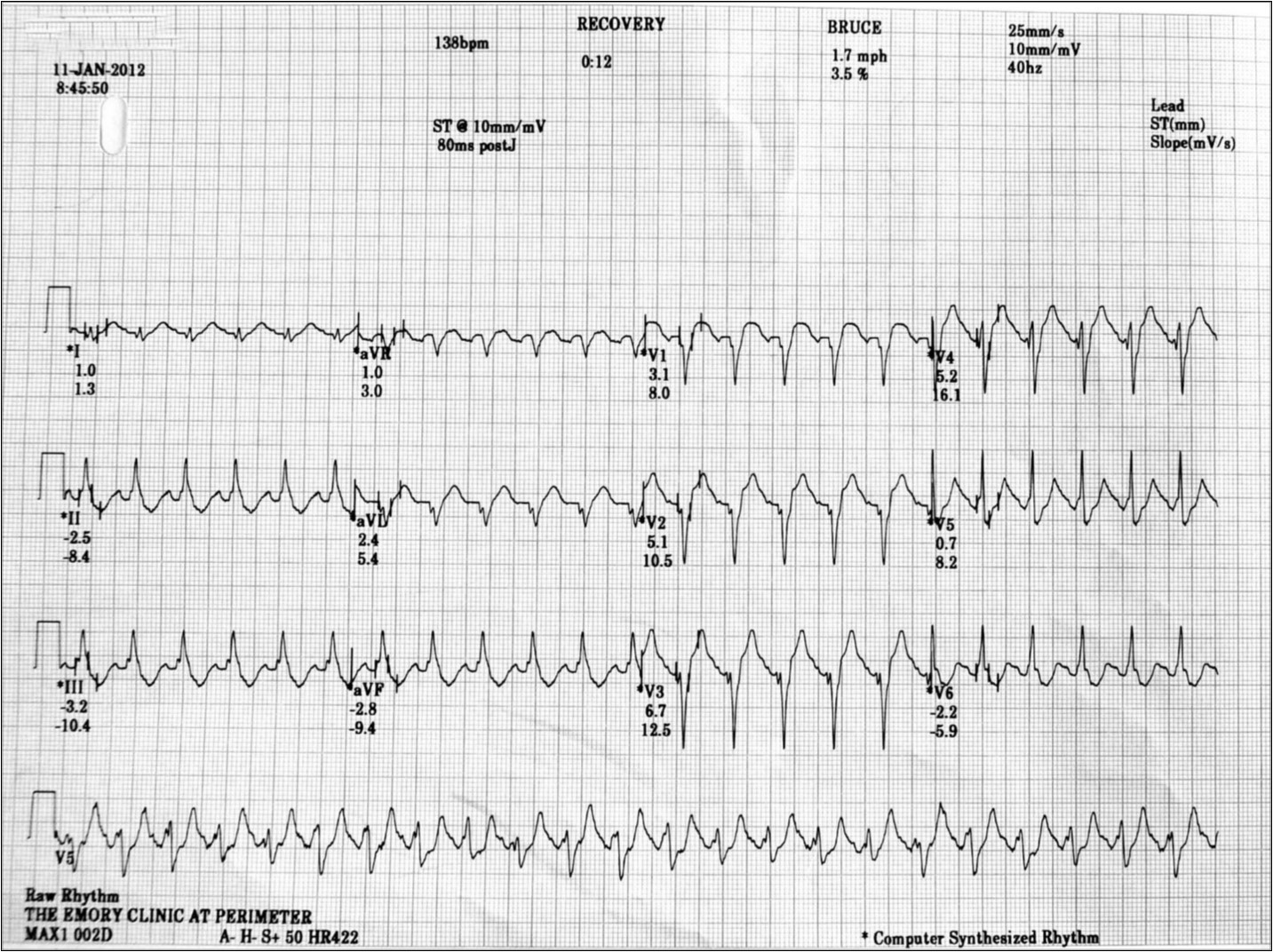 Figure 3. Complete LBBB developed during the later stages of the recovery period (115 bpm). 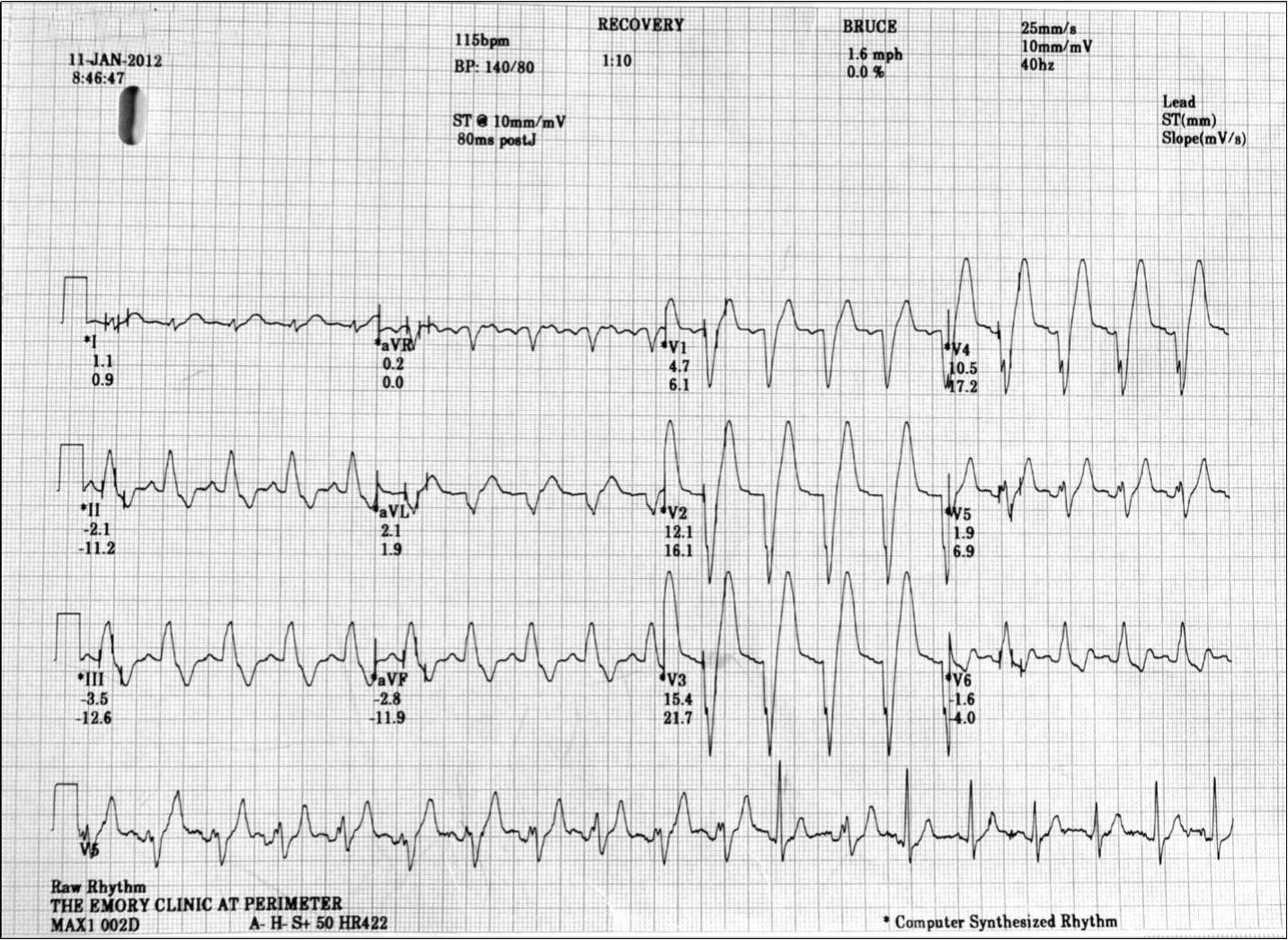 Figure 4. Complete resolution of LBBB occurred only after 3:10 minutes of recovery. 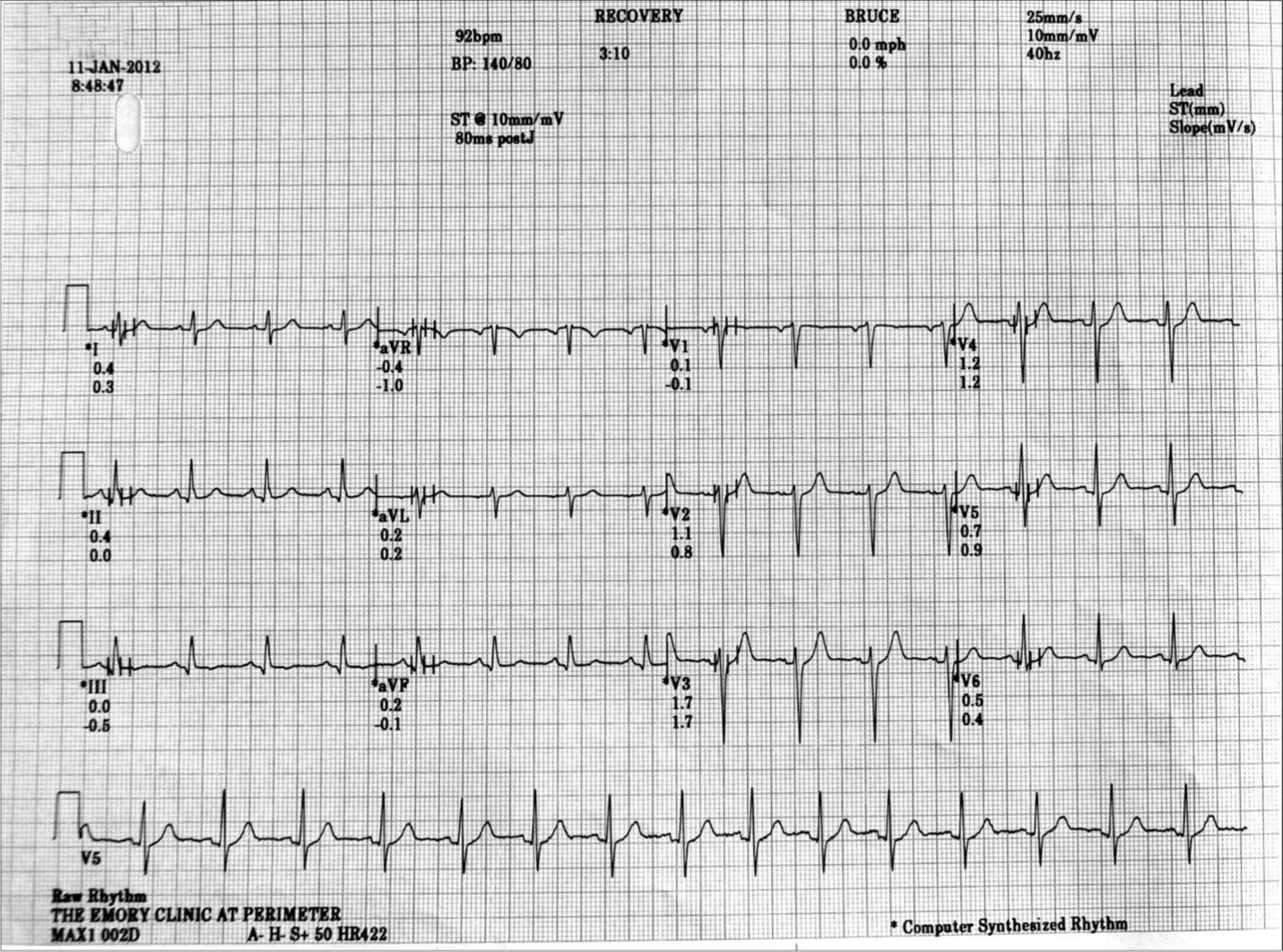 Exercise-dependent CLBBB is a relatively rare phenomenon. In the present case, we describe a patient with transient CLBBB that developed only during the recovery period of a stress test, at a sub-maximal heart rate of 138 bpm, and persisted for more than 2 minutes despite the slowing of the heart rate to 92 bpm. The classic manifestation of acceleration-dependent aberration is the appearance of aberration at a critical cycle length, followed by normalization of conduction with slowing of the heart rate. The following vagaries of acceleration-dependent aberration were previously described by Fisch C. et al 1: group I – unexpected normalization of conduction when aberration would be expected to continue and group II – unexpected appearance or persistence of aberration under conditions in which it would not be expected. In the present case, LBBB aberrancy was first noted for 2 consecutive beats at a cycle length of 400 ms. However, conduction and QRS width had unexpectedly normalized despite continuing acceleration of the heart rate (consistent with group I described above). Possible explanations for resumption of normal conduction include small changes in the cycle length not recognized in the electrocardiogram, shortening of the bundle branch refractory period, supernormal conduction due to increase in the concentration of circulating catecholamines, or less likely, an equal delay in the right and left bundle branches. Thereafter, LBBB suddenly developed (Figure 2), at a sub-maximal heart rate, and continued for several minutes with progressive widening of the QRS complex (Figure 3), despite the slowing of the heart rate (consistent with group II, described above). Persistence of aberration is most likely due to concealed transeptal conduction from the right bundle to the left bundle and retrograde penetration of the left bundle 2. Ultimately at a heart rate of 92 bpm aberration resolved (Figure 4).

Several reports have addressed the significance of exercise induced CLBBB with regards to ischemia. The prognosis is usually good if no underlying heart disease can be detected 3. Since our patient's rest and stress echocardiograms excluded underlying cardiac disease, we presume that his prognosis will be favorable and thus no further medical therapy is warranted. Vasey et al have made a clear distinction between patients in whom CLBBB developed at a heart rate of 125 bpm or higher who were free of coronary artery disease (CAD) and patients who presented with typical angina and the appearance of the blockade at a heart rate of less than 125 bpm and who had CAD 4. Hertzeanu et al 5 reported from their experience that the appearance of CLBBB during exercise at a heart rate below 125 bpm, does not help to distinguish patients with CAD from those without. Candell Riera et al 6 showed that patients with frequency-dependent LBBB (FD-LBBB) and CAD were characterized as being older and reaching lower peak O2 consumption and a lower myocardial O2 consumption than patients with FD-LBBB and normal coronary arteries. Patients with FD-LBBB and normal coronary arteries had a good medium- and long-term prognosis with regard to myocardial infarction and mortality but more than half of these patients progressed to advanced AV block, with the consequent need for pacemaker implantation. They also found that the prognosis of patients with FD-LBBB and CAD was worse, with a higher mortality rate.