Western studies have shown that hypertension increases carotid intima media thickness (cIMT) as early as in childhood and adolescence. However, similar data from India is lacking. Indians have different genetic, racial, geographic, cultural and dietary patterns. Hence a similar trend may not be experienced among young Indian subjects.

46 young cases (age 16 – 35 years) of hypertension were recruited along with age, sex and BMI matched controls. Patients with body mass index (BMI) >25 kg/m2, diabetes mellitus and secondary causes of hypertension were ruled out. All patients underwent carotid ultrasonography for assessment of cIMT.

Prevalence of systemic hypertension has increased in children and young adults during the last few decades. Nutritional surveys conducted in the USA show a significant rise in systolic and diastolic blood pressures.1 This secular trend of increase in blood pressure is attributed to obesity, change in dietary habits, decreased physical activity and increasing stress. Similar data is lacking from India. Small surveys done among school children in India suggest a prevalence of hypertension ranging from 2-5 %.2

End-organ damage is common in children and young adults with primary hypertension. 3, 4, 5 Recently, carotid artery intima media thickness (cIMT), as measured by vascular ultrasound, has emerged as a potential marker of hypertensive vascular damage. In adults, increased cIMT is an indicator of generalized atherosclerosis and a strong predictor of future cardiovascular morbidity and mortality. cIMT is increased in several childhood diseases that increase cardiovascular risk, including diabetes,6 familial hypercholesterolemia,7 hypertension,8, 9 and end-stage kidney disease. 10,11 cIMT has also been shown to be increased in young normotensive individuals with a positive family history of hypertension.12 Among Indians, cIMT has been shown to be increased in individuals with higher triglycerides, insulin resistance, higher diastolic blood pressure, metabolic syndrome, lower HDL-cholesterol and physical inactivity.13

Whereas western studies have shown that hypertension increases cIMT as early as in childhood and adolescence,8, 9 similar data from India is lacking. However, Indians have different genetic, racial, geographic, cultural and dietary patterns. Hence a similar trend may not be experienced among young Indian subjects. Further, in these studies correlating hypertension with increase in cIMT in children, majority of the subjects were overweight or obese (mean BMI 27.7 and 28.2 kg/m2). Obesity can independently affect cIMT.14 The present study was done among young Indian adults with essential hypertension, to see if cIMT and atherosclerotic burden is increased in this population at an early age. Various confounding variables like diabetes mellitus and obesity were excluded from the present study.

Newly diagnosed hypertensive subjects were recruited from the cardiology outpatient department or ward of Sawai Man Singh hospital, Jaipur from April 2012 to March 2013. Hypertension was defined as 2 office BP readings revealing systolic blood pressure of ≥140 mmHg and/or diastolic blood pressure of ≥90 mmHg. Patients who were already receiving treatment for hypertension were not recruited. All patients underwent assessment of body mass index (BMI) and were subjected to routine investigations, including complete blood count, fasting lipid profile, fasting blood sugar, blood urea and serum creatinine. Subjects were limited to young adults aged 16 to 35 years, without evidence of secondary hypertension. Secondary causes of hypertension were excluded by history, physical examination, urinalysis, serum chemistries, renal ultrasonography, echocardiography and other tests as indicated. Patients with concomitant diabetes mellitus and patients with BMI>25 kg/m2 were also excluded. For each hypertensive subject, an age, sex and BMI matched healthy, normotensive control subject was recruited. Control and hypertensive subjects were matched pairwise for gender, age (±1 year) and BMI (±10%). Control subjects were required to have 2 office BP readings with systolic and diastolic BP <120/80. All of the participants gave informed, written consent. The study protocol was in accordance with Helsinki declaration.

All selected patients and controls underwent comprehensive transthoracic 2D Echo-Doppler examination with Philips iE33 xMATRIX machine. Carotid IMT was determined in both hypertensive and control subjects using a L11-3 matrix transducer on the Philips iE33 xMATRIX machine. On longitudinal 2D ultrasound images of the carotid artery, the near and far arterial walls are displayed as 2 echogenic lines, the adventitia and intima, separated by the hypoechoic media. The distance between the leading edge of the first bright line on the far wall (lumen–intima interface) and the leading edge of the second bright line (media–adventitia interface) indicates the IMT.15 Measurements of the far wall were made 1 cm proximal to the bifurcation of the left and right common carotid artery, with the subject’s head turned toward the opposite side by 45 degrees. Average of the two measurements was taken in order to define the cIMT for each subject. 2D echocardiography and carotid ultrasonography of the patients was performed within 30 days following the diagnosis of hypertension.

Continuous variables are expressed as mean ± SD and categorical variables as percentages. Fisher’s exact test was used to evaluate the difference in group proportions. Pearson correlation coefficients were used for correlations within the hypertensive group. Spearman correlation coefficients were used for correlations with the groups combined, because the control group was not normally distributed. The Wilcoxon rank sum test was used to examine differences between the hypertensive and control groups. P value <0.05 was considered statistically significant for all analysis. Statistical analysis was performed using SPSS 21 software. 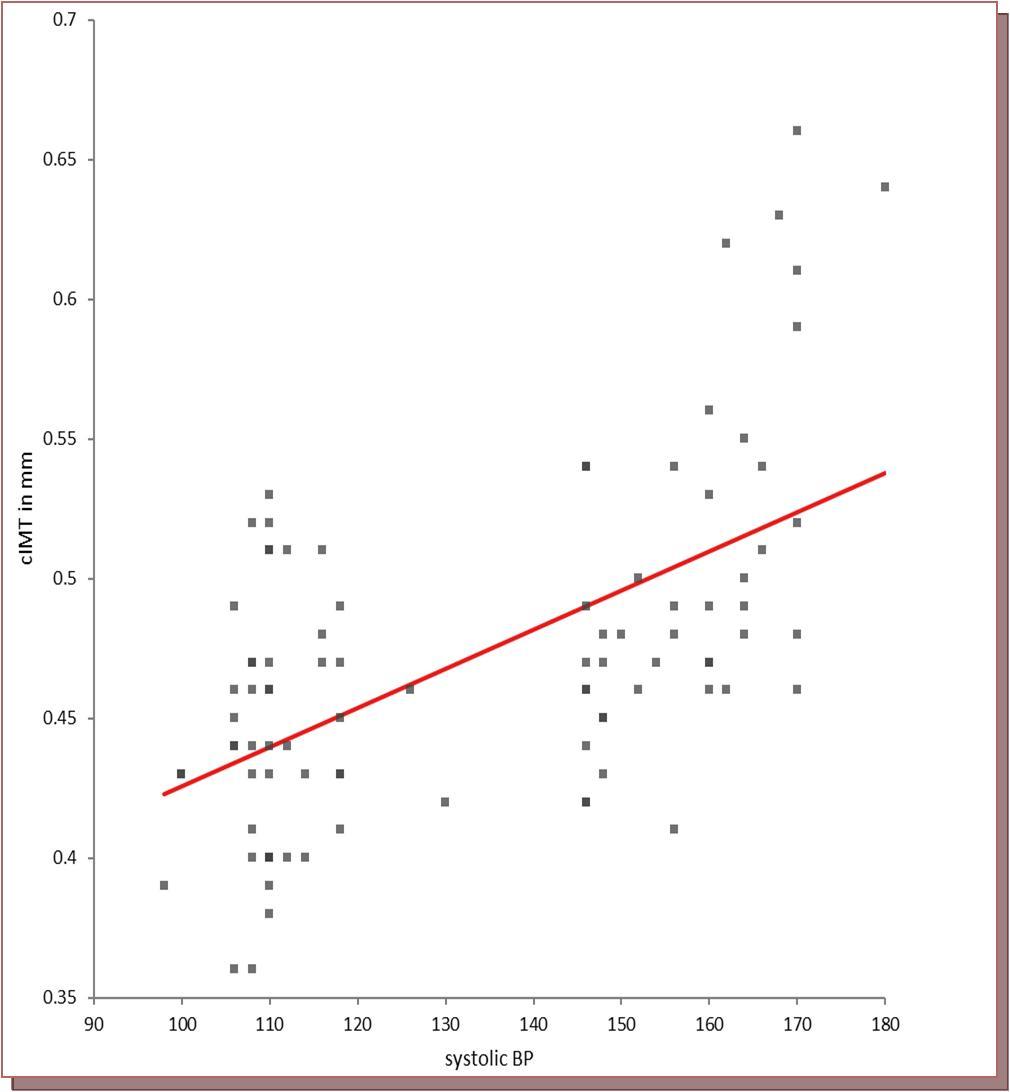 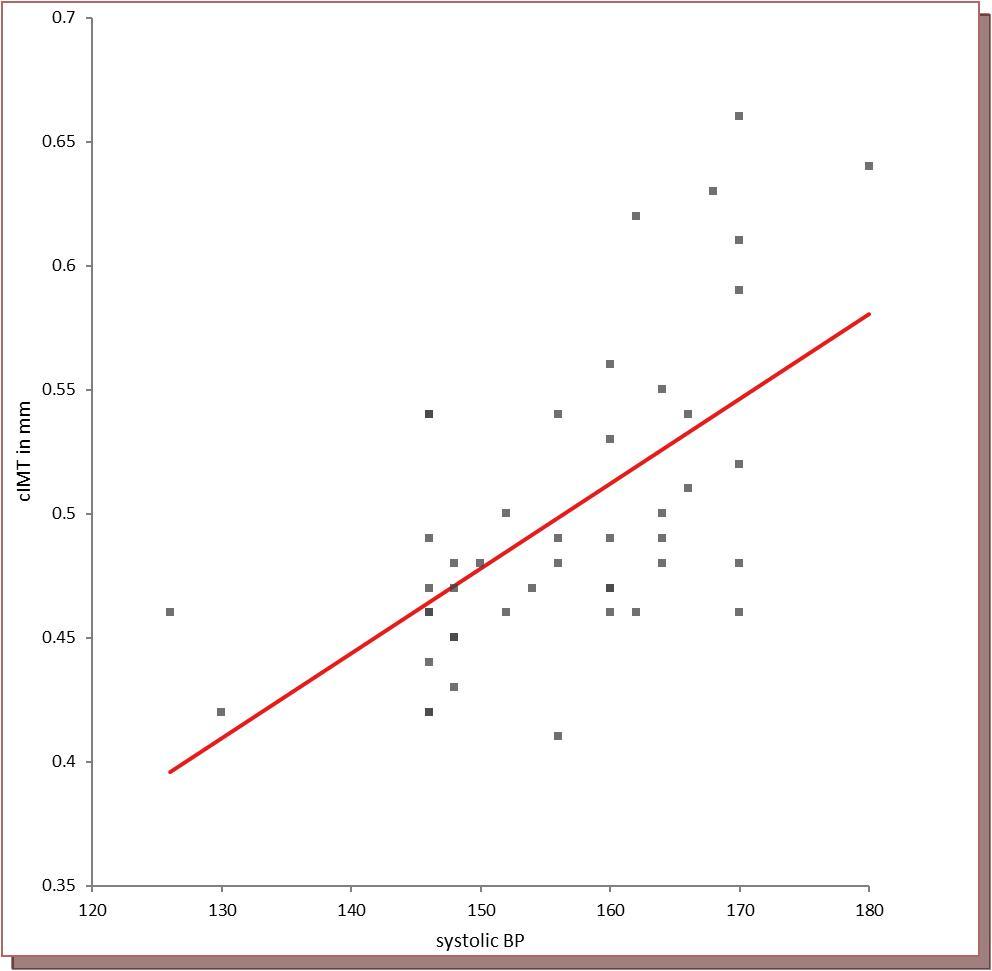 With increasingly sedentary lifestyles and changing dietary patterns, the prevalence of hypertension in the young generation is increasing.16 Prevalence of hypertension varies across countries and states. Western studies have shown that elevated blood pressure, systolic or diastolic, at any age, in either sex, is a contributor for all forms of cardiovascular disease. Elevated blood pressure levels lead to vascular damage and increased atherosclerosis. cIMT is a useful tool to measure global atherosclerotic burden which has been correlated with the occurrence of adverse cardiovascular events. Identifying these individuals early and treating their hypertension and modifying associated risk factors will reduce the incidence of complications in adolescents and adults.

The present study has tried to explore a possible increase in cIMT in hypertensives at an early age in the Indian context. At the same time, possible confounding factors like obesity, diabetes and end stage renal disease have been eliminated. Only newly diagnosed patients of hypertension were selected, to avoid possible confounding effects of treatment with angiotensin converting enzyme inhibitors/other antihypertensives or statins on cIMT.

In the present study, 29/46 cases had ISH. ISH, although usually associated with the elderly, it is also the major hypertensive subtype in adolescents 17 and young adults.18 Our results show that cIMT was increased in young hypertensives compared with normotensive controls. The same finding has been observed in western studies done among adolescents and young adults.8, 9 The finding of increased cIMT in the hypertensive group supports the notion that primary hypertension can lead to vascular abnormalities early in childhood and adolescence. This result is consistent with previous autopsy studies that showed early atherosclerotic changes of the aorta and coronary arteries associated with hypertension in adolescence.19, 20

In contrast to western studies, the mean cIMT value observed was comparatively lower in our patients. This may be explained by the lower BMI in our study population. Further, difference in genetic, racial, geographic, cultural and dietary patterns among these different study populations may influence cIMT.21, 22, 23 The mean cIMT value observed in our study is similar to what was observed in another study involving young adults of Delhi.13

Also, in our study, SBP correlated better with increased cIMT as compared to DBP. This is similar to observation in western children and adolescents, where cIMT correlated with SBP better.8However, this is in contrast to what was observed in another recent study done in India, where cIMT correlated significantly with DBP.13 This may be explained by the difference in age in these cohorts, as systolic hypertension is predominant in adolescents and young adults.

The present study has a few shortcomings. Being a case control study, it has not followed up patients. Hence, present study cannot inform us about a particular value of cIMT which predicts increased risk of cardiovascular events. Also, it does not tell us what effect does appropriate treatment of hypertension with angiotensin converting enzyme inhibitors or other drugs will have on cIMT over a period of time.

To conclude, hypertension in young Indians is associated with increased cIMT. This increase is seen early in the natural history of the disease, at the time of diagnosis. Treating their hypertension and modifying associated risk factors will help in reducing the incidence of cardiovascular complications in adolescents and adults.