Fifty patients (54.16 ± 8.4 years) and 50 controls (52.17 ± 8.6 years) were enrolled. According to the presence or absence of LVH, patients were classified as LVH(+) and LVH(–), respectively. Global longitudinal function was calculated by TDI, global strains (longitudinal (LS), radial (RS), and circumferential (CS)) were assessed by STE.

In hypertensive patients, STE provides more detailed information than conventional echocardiography and TDI, since it reveals a systolic dysfunction before hypertrophy occurs (Stage A of ACC/AHA classification of HF) and identifies some early LV mechanic changes that might improve the clinical management of these patients

Hypertension is a well-recognized risk factor for cardiovascular disease and is a major contributor to a large percentage of heart failure (HF) cases.1, 2, 3 Identifying subclinical left ventricular (LV) systolic dysfunction among hypertensives might be helpful in identifying patients at higher risk of developing heart failure.

Also, given the prevalence of hypertension in the population, identifying patients at high risk for heart failure might permit targeted preventive strategies. Early detection of left ventricular (LV) systolic dysfunction in affected patients is, therefore, a crucial issue.

Conventional echocardiography, however, detects abnormalities in LV systolic function only in the advanced stages of hypertensive heart disease (HHD), when a clear LV remodeling/hypertrophy is evident; diastolic LV dysfunction, in contrast, occurs early and its detection is easier even by conventional techniques.4, 5, 6, 7

Nevertheless, recent research on HF with normal ejection fraction (EF) has demonstrated that isolated diastolic dysfunction is rare, being abnormalities of diastolic performance most frequently associated with a subclinical impairment of systolic function.8, 9, 10, 11, 12, 13, 14, 15 In this respect, preclinical alterations of LV systolic function have been demonstrated in patients with essential hypertension and normal EF by tissue Doppler imaging (TDI), strain echocardiography or magnetic resonance tagging.16, 17, 18, 19, 20

It is previously demonstrated that M-mode echocardiography can be used to measure circumferential shortening at the mid-wall (FSmw,%),21, 22 a measure of regional circumferential strain. Reduced FSmw is prevalent among hypertensives with hypertrophic remodeling,21 and de Simone and coworkers have shown that low FSmw in relation to stress is a marker of poor outcome.22 However, FSmw is related to ventricular geometry—the relative wall thickness(RWT).21 Newer methods, such as 2D – speckle imaging, appear to provide a direct, angle and geometry independent measure of circumferential strain (CS).23

Recently, it has been demonstrated that speckle tracking echocardiography (STE) provides more information than TDI, allowing a non invasive measurement of overall LV strain and twist.24, 25, 26, 27 This technique, therefore, can provide new mechanistic insight into systolic dysfunction even in patients without structural cardiac alterations (Stage A of ACC/AHA classification of HF).28

The aim of the current case-control study was to use speckle tracking imaging as well as standard echo techniques to identify subclinical abnormalities in LV function among hypertensives, as compared to normal controls.

To assess the subtle differences in the LV principal strains for characterizing features of subclinical LV dysfunction in patients with systemic hypertension and preserved LV systolic pump function.

The protocol was approved by the local research Ethics Committee and a written informed consent was obtained from each subject.

Two-dimensional (2D) grayscale harmonic images were obtained in the left lateral position using a commercially available ultrasound system (i-33 PHILIPS) equipped with a cardiac M4S transducer. All measurements were averaged from three heart beats. LV wall thickness, diameters, volumes and EF were measured according to the American Society of echocardiography (ASE) recommendations.31, 32 The end-diastolic relative wall thickness (RWT) was also calculated, and a cut-off value of ≥0.45 was taken into account to define a concentric remodeling.31

Color TDI cineloops of three cardiac cycles from both four- and two-chamber views, obtained at end-expiratory apnea, were acquired and digitally stored. Gains were minimized to have a clear tissue signal with minimal background noise. To acquire the highest tissue velocities, the angle between the Doppler beam and mitral annulus was adjusted to a minimal level (<20º). From stored color TDI loops, a PW Doppler sample was set, offline, at the level of the septal and lateral corner (apical four-chamber view), and anterior and inferior corner (apical two-chamber view) of mitral annulus. The peak of systolic (S’), early diastolic velocity (E’) and late diastolic velocity (A’) was calculated for each corner. The results were averaged to obtain a mean value of S’, E’ and A’.

The analysis of 2D strain was performed offline, using a semiautomatic tracking of LV. After manually tracking the endocardial border on a 2D image end-systolic frame, the software automatically tracked myocardial motion, creating six equidistant speckle tracking regions of interest for each image. Global LS, CS, and RS were obtained by calculating the average strain derived by myocardial tracking from each view

All subjects were in sinus rhythm without signs and/or symptoms of HF (NYHA class I; Table 1). No difference between patients and controls was observed regarding: age, gender and heart rate (P = ns).34 %of hypertensive subject had evidence of concentric remodeling. As expected, most controls had normal LV mass index and geometry. No difference between LVH(–) and LVH (+) patients was found with respect to systolic (152.3±8.89 mmHg vs. 157.2±7.38 mmHg, P = ns) and diastolic blood pressure (97.36±7.27 mmHg vs. 99.24±6.74 mmHg,P = ns). 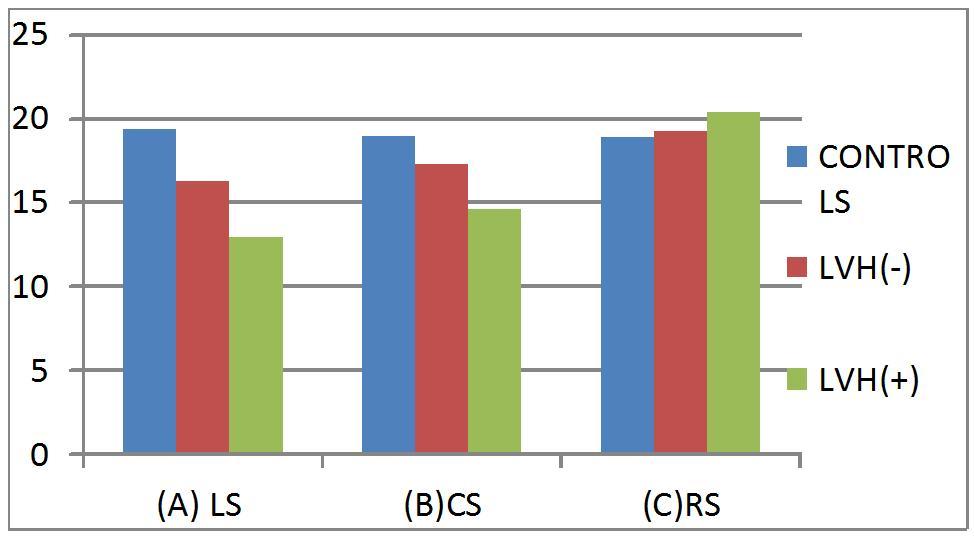 The following relationships have been observed:

Hypertensive patients without symptoms and/or signs of HF and with normal contractile function, as explored with conventional echocardiography, show subtle adaptative changes of LV systolic mechanics, which can be identified only by Speckle Tracking Echocardiography. This technique permits the detection of early LV diastolic function changes in hypertension,33 and also reveals that, in hypertensive patients free from clinical manifestations of HF, the earliest myocardial impairment involves the longitudinal fibers.34

The main findings of this research are:

(1) Hypertension results in early changes of LV mechanics that begin even before LV hypertrophy occurs, as suggested by 2D LS and CS reduction in patients with normal LV geometry (Stage A).

(2) In hypertension, alterations in LS and CS, as well as RS changes are related to LV concentric hypertrophy (Stage B).

LV Mechanics in Patients with Normal Geometry (Stage A):

It is well known, and confirmed by this study, that a preclinical systolic dysfunction occurs in hypertensive patients with LV hypertrophy.35, 36

We have observed, in addition, an impairment of longitudinal and circumferential systolic function even in patients with normal LV geometry. In this respect, STE appears more sensitive than both conventional echocardiography and TDI in identifying a reduction of intrinsic myocardial contractility, evident in hypertensive patients even long before LV hypertrophy becomes detectable. This finding highlights the advantages of 2D strain over TDI in early identifying LV systolic function impairment.

These early changes of myocardial contractility may be secondary to hemodynamic and/or biochemical alterations. The increased end-systolic wall stress, an expression of afterload, as well as the loading conditions, are likely to play a role in determining the longitudinal dysfunction in HHD. On the other hand, the chronic increase of endsystolic wall stress may promote subendocardial synthesis of collagen, thereby contributing to reduction of longitudinal deformation. With regard to the biochemical changes, myocardial fibrosis is one of the factors responsible for myocardial function deterioration in hypertension 37,38 in affected patients with normal EF, impaired LS and increased LV torsion are directly related with serum levels of tissue inhibitor of metalloproteinase-1 matrix, a marker of myocardial fibrosis.39 This suggests that abnormal collagen turnover and myocardial fibrosis may contribute to early LV contractile dysfunction.40, 41 On the other hand, in this study we observed that RS is preserved in hypertensive patients without structural LV changes.

LV Mechanics in Patients with Concentric Hypertrophy (Stage B):

LV hypertrophy is a common response to increased and prolonged afterload and is an independent predictor of cardiovascular morbidity and mortality.42, 43, 44, 45, 46 LV hypertrophy is associated with a variety of alterations including: fibrosis, impaired coronary artery vasodilatory capacity, depressed LV wall mechanics, and abnormal LV diastolic filling pattern.47, 48, 49, 50, 51 Subendocardium is susceptible to the deleterious effects of both interstitial fibrosis and hypoperfusion, to the extent that in HHD impairment of the subendocardial function results in abnormal longitudinal function.52 This is also suggested by a recent study based on 3D wall motion tracking analysis, demonstrating that myocardial strain pattern depends on LV adaptative responses to high blood pressure.53 Our results show that in a relatively late stage of HHD, corresponding to stage B of HF, additional LV changes occur, such as increase of RS, suggesting an involvement of mid-myocardial layers. The finding is consistent with the results of a recent study, demonstrating that in hypertension LV longitudinal systolic function progressively deteriorates.54

A limitation of this study is the small size of the sample; this is dependent on the inclusion of highly selected hypertensive patients (without additional cardiovascular risk factors and/or history of angina and/or myocardial infarction and/or heart valve disease, etc.), with exclusion of those with poor acoustic window. A further limitation is that we have included for the assessment of LV mechanics patients treated with antihypertensive drugs