Current Issue Volume No: 2 Issue No: 4

A 35-year-old patient with no notable pathological history was admitted to our department via the emergency room for acute anterior chest pain. The somatic examination was without abnormalities as well as the baseline biological tests. The electrocardiogram demonstrated epicardial ischemia in the infero-lateral territory without other abnormalities. The cardiac troponin I was slightly elevated (32ng/l, N<19ng/l). Subsequent controls after 30min, 60min and 180min did not show significant variations. Subsequent investigations (CT, coro-CT, coronary angiography) led to the diagnosis of intramyocardial HC of the left ventricle, with no abnormalities of the coronary arteries. After surgical excision, the evolution was favorable with normalization of the electrocardiogram and the troponin Ic.

Cardiac localization of this parasitosis is exceptional and characterized by an important clinical polymorphism making its diagnosis a real challenge. It seems useful to discuss the diagnosis of cardiac HC in front of any unexplained electrocardiogram abnormality occurring in endemic zone.

The cardiac localization of human echinococcosis is rare and little known 1, 2, 3, 4. It is exceptionally primary and isolated; classically integrating into a chart of thoracic involvement with associated pulmonary localization or of more diffuse form with multi-visceral involvement 1, 2, 3, 4. Primary forms of cardiac hydatid cyst (HC) account for only 0.5 to 2% of all human hydatid disease 5, 6.

Cardiac hydatidosis is a condition characterized by its long functional tolerance and its clinical and para-clinical polymorphism, thus representing a real diagnostic and therapeutic challenge that is sometimes difficult to resolve 3, 4, 5, 6, 7, 8.It is particularly serious and severe because of its possible complications: acute pericarditis 8, tamponade 9, arrhythmia 10, infarction 11, pulmonary embolism 12, 13, cardiac arrest , and sudden death 14.

A 35-year-old patient with no notable pathological history was admitted to our department via the emergency room for acute anterior chest pain.

The chest X-ray was without abnormalities. The electrocardiogram demonstrated epicardial ischemia in the infero-lateral territory without other abnormalities (Figure 1). The cardiac troponin I was slightly elevated (32ng/l, N<19ng/l). Subsequent controls after 30min, 60min, and 180min did not show significant variations. 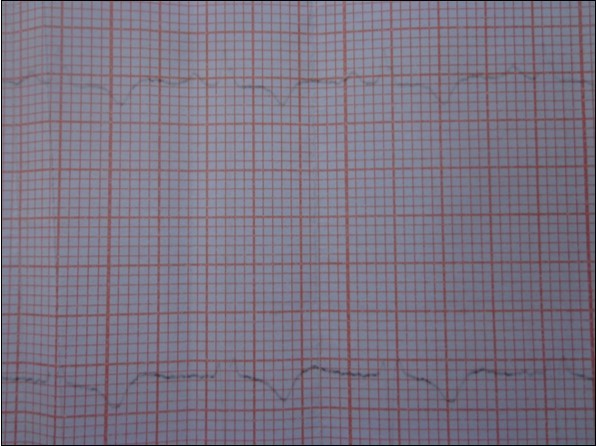 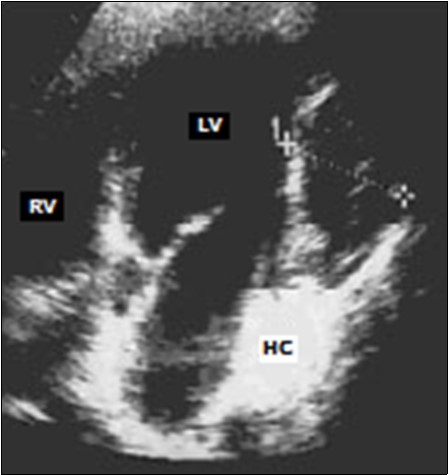 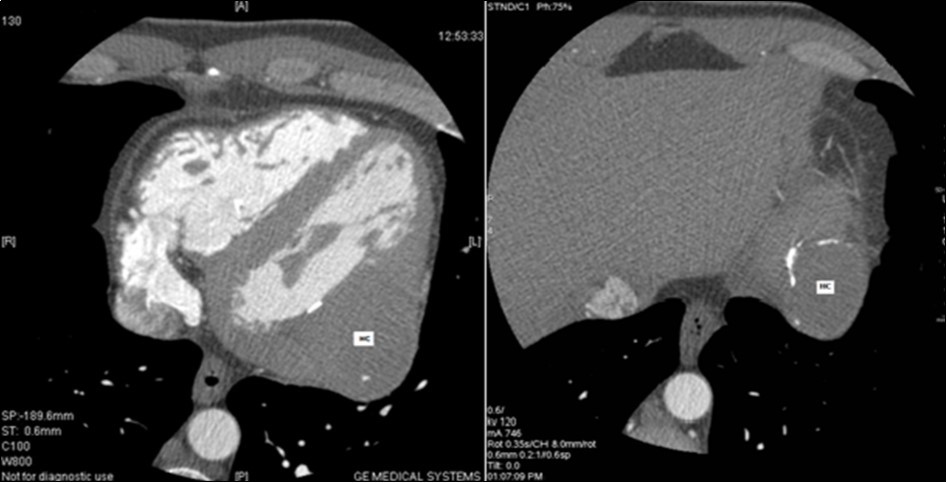 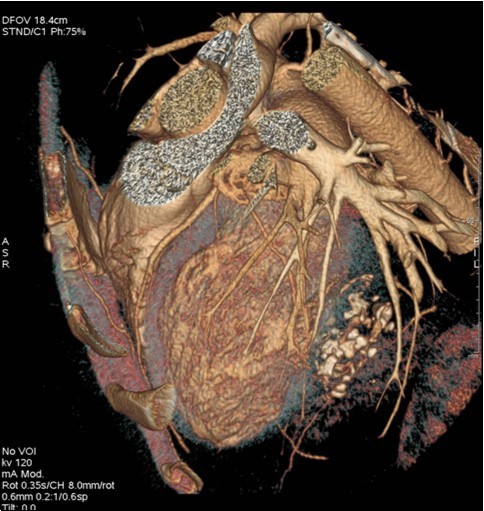 Coronary angiography was without abnormalities, as was coro-CT; In particular, no atheromatous or embolic lesions or extrinsic compression of the coronary arteries have been observed.

After these explorations, the radiological aspect was very suggestive of a cardiac HC type V of the Gharbi classification. The hydatid serology was negative. The assessment for other hydatid locations (chest X-ray, abdominal ultrasound, and thoraco-abdomino-pelvic CT) remained negative.

The patient underwent cardiac surgery after two weeks of oral treatment with Albendazole at a dose of 800mg/day. Intraoperative findings concluded to a calcified intra-myocardial HC. The excision of the tumor was complete and the anatomopathological exam confirmed the diagnosis of cardiac HC. The postoperative course was simple and additional treatment with Albendazole at the same dose was prescribed for three months postoperatively without incident.

Subsequent electrocardiograms and troponin Ic controls were without abnormalities.

The primary cardiac localization of HC represent only 0.5 to 2% of all human hydatid disease 5, 6, and the left cardiac cavities are less frequently affected than the right ones because of the thickness of their myocardium and their less vascularized nature. In contrast, and because of the thinness of the muscular wall and the low pressure regime in the right cavities, the latter represent the preferred seat of cardiac echinococcosis 15, 16. In these cavities, the HC is often superficial (under-endocardial development), which explains the important frequency of his endocavitary rupture compared with that of the left ventricle 17.

The cardiac localization of the HC is characterized by its important clinical polymorphism; the most common symptoms are precordialgia and dyspnea 15, 16, 18. More rarely, it may be palpitations, haemoptysis, signs of right heart failure, pseudo-anginal acute pain often medio-thoracic and sometimes retro-sternal in relation with ischemia of the right ventricle 15, 16, 18. Exceptionally cardiac HC may cause syncope 19 or congestive heart disease 20. In most cases, cardiac HC remains totally asymptomatic 21, 22.

This localization is also characterized by its gravity: the cardiac localization of the HC is potentially serious and even if the spontaneous involution and calcification is possible, the ultimatum of this localization remains ineluctably the death 1, 2, 3. This severity is mainly due to acute cardiac complications, often fatal; which are: pulmonary embolism 12, 13, acute pericarditis 8, 23, 24, endocavitary rupture with anaphylactic shock, massive embolism or blockage of a valvular orifice 14.

Localized myocardial ischemia remains an exceptional acute complication during cardiac HC 23; this ischemia is of compressive origin due to the endo-myocardial development of the cyst which hinders the intra-myocardial coronary vascularization.

Apart from complicated cysts, the diagnosis of the cardiac HC represents a real challenge for the clinician because of the absence of specific clinical and electrical signs; medical imaging is very helpful in this context 21, 22.

On the electrocardiogram, signs of myocardial necrosis may be due to thinning of the myocardial layers surrounding the cyst, or secondary to obstruction of the coronary vessels by daughter vesicles 11; a true necrotic Q wave can also be seen 11, 23.

Echocardiography (trans-thoracic and/or trans-oesophageal) remains the test of choice for the positive diagnosis of cardiac HC 18. It makes it possible to specify the seat of the cyst at the level of the heart and its relation with the adjacent structures as well as its repercussion on the cardiac cavities 18, 25. The cardiac HC is often unique 21 and more rarely multiple 16.

Cardiac imaging in section (cardiac and cardio-thoracic CT and/or MRI) is useful to provide more information on the locoregional extension of cardiac echinococcosis and to search other intra- and extra-cardiac localizations 1, 18. MRI is the method of choice for the exploration of cardiac, vascular and parenchymal lesions providing a complete lesion assessment before cardiac surgery; it has a good sensitivity and allows the diagnosis of small cysts 18.

Surgery is the standard treatment for cardiac hydatidosis 15, 16, 18, 19, 25. The medical treatment based on benzimidazole derivatives is indicated alone in disseminated and inoperable cysts or if contraindications to surgery. It is also prescribed intra-operatively to reduce the risk of secondary dissemination and posto-peratively to prevent recurrence 18, 25.

The cardiac localization of this parasitosis is exceptional but is characterized by its great latency, its clinical polymorphism, its potentially fatal complications, and a significant postoperative mortality.

In our observation, the absence of cardiovascular risk factors, the absence of underlying diseases, the young age, the normalcy of coronary angiography, the concordance of territories between epicardial ischemia and HC, as well as the normalization of the electrocardiogram and troponin Ic after the surgical cure of the cyst makes it possible to advance a direct link of causality between this tumor and the myocardial ischemia.

It seems useful to discuss the diagnosis of cardiac HC in front of any unexplained electrocardiogram abnormality occurring in endemic zone.