Recurrent pregnancy loss is an important reproductive issue with a heterogeneous etiology where two or more consecutive abortions occur before 20 weeks of gestation. Approximately 15% of all clinically recognized pregnancies result in miscarriage with an incidence of 1 in 300 cases. Couples, who experience repeated pregnancy loss before three months of gestation, mostly have fetuses with chromosomal aneuploids. A non-consanguineous couple with a married life of 4 years was referred to the Institute with a clinical history of three first trimester abortions. Karyotype analysis revealed a balanced autosomal translocation between chromosomes 4 and 6 with 46, XX, t (4;6)(q35; q22) karyotype in the female and normal 46, XY in the male partner. Therefore, the siblings and the couple were suggested for extended genetic counseling. Interestingly, similar translocation was seen in her father and three sisters, whereas her mother and elder sister showed a normal chromosomal constitution, indicating the paternal inheritance.

Embryonic or fetal demise is one of the most common outcome of conception where nature’s quality control works in selecting genetically normal offspring 1. Recurrent pregnancy loss (RPL) is a heterogeneous condition involving endocrine, uterine, genetic, immunological, anatomical, along with psychological factors 2. Pregnancy loss may occur at any time before the second trimester but is most common during the first trimester of gestation 3. About 50% of conceptions are spontaneously lost prior to term considered as the most perplexing problems of gynecology and a significant cause of maternal mortality. The chromosomal structural abnormality is seen in 2–5% of the cytogenetically abnormal conceptus and the most frequent types are balanced and unbalanced translocations. Translocations are described as the exchange of chromosomal material between two non-homologous chromosomes where carriers of balanced chromosomal translocations are phenotypically normal, but more than 50% of their gametes are unbalanced due to abnormal segregation during meiosis, thus forming reproductive disturbances. This could occur in 2.2% of couples with one miscarriage, 4.8% with two miscarriages, and 5.7% with more than three miscarriages 4. The rate of structural chromosomal abnormalities is more in cases with RPL when compared to numerical chromosomal aberrations. Hence, the couples experiencing RPL must be screened for chromosomal abnormalities before any other investigations and medications.

The present case study reports a female with an inherited balanced translocation between chromosomes 4 and 6 at long arms of 35 and 22 breakpoints respectively.

A non-consanguineous couple with a complaint of RPL was referred to the institute. The age of the female was 24yr and male was 30 yr with a married life of 4 years. The clinical history of the couple showed three spontaneous abortions at the first trimester. The pedigree analysis shows that the female has four siblings and no brothers whereas the male partner has one sister and one brother who are fertile (Figure 1). The female pro-band has no other complaints except RPL. Informed consent was obtained from the couple. 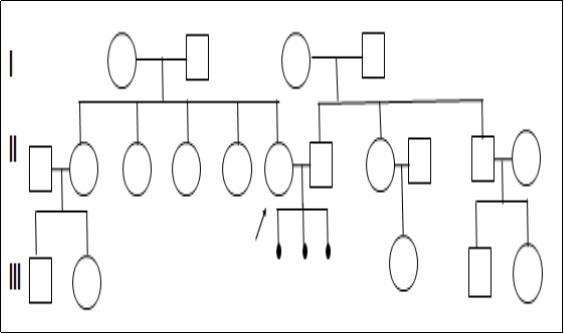 Cytogenetic analysis of peripheral blood lymphocytes of the couple was performed according to Moorehead et al. (1960) protocol, and standard GTG-banding was done 5, 6 . 25 metaphases were screened and analyzed using ASI software. The interpretation was made as per ISCN 2016 7. Karyotype analysis revealed a balanced autosomal translocation between chromosomes 4 and 6 in the female partner. Further, the karyotype analysis was carried out in proband's family to check for the inheritance pattern. 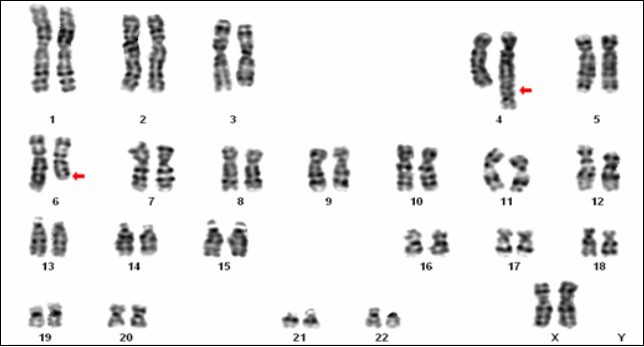 Couples with balanced translocations usually have a normal phenotype but may have infertility associated with oligospermia in males and miscarriages in females. This is because of the risk of producing unbalanced gametes that gets terminated before reaching the second trimester.

The present case reported a female partner with a history of abortions revealed 46, XX, t(4;6)(q35; q22) karyotype. The inheritance of such translocation may increase the risk of miscarriages due to mutation or segregation in the previous generations and or also influenced by the size and the genetic content of the rearranged genetic segment in the present generation or in some cases it may be a novel translocation. There are only a few reports in the literature associated with abnormalities in either chromosome 4 or chromosome 6. An earlier study by Neri et al. (1980), reported a balanced translocation between chromosomes 4 and 9 t (4;9) (q35;q12) with a breakpoint within the heterochromatic region of chromosome 9 in a woman with recurrent abortions 8. Zhang et al. (2016) also stated that the breakpoint at 4q35 was associated with recurrent pregnancy loss 9.

Similarly, previous reports have indicated a correlation between the breakpoints at 4q13, 4q21, 4q25, 4q32, and 4q35 with recurrent abortions and reproductive failures 10, 11. A study in 69 patients by Pickard et al. (2004) with psychiatric illness and mental retardation also revealed the subtelomeric deletions of chromosome 4q35.212. The 4q subtelomeric region also harbors a locus that contains a candidate gene, FRG1 responsible for facioscapulohumeral muscular dystrophy. The 4q deletion does not show any of the phenotypic features of any disorder 13. Preferably, the proximity of the gene possesses a variable number of telomeric repeat sequences (D4Z4) which seems to be the chief determinant of pathology.

Another gene from protein tyrosine phosphatase family, PTPRK, which is mapped to 6q22.2-23.1 encodes protein tyrosine phosphatases (PTPs) that regulate cell growth, differentiation, mitotic cycle, and oncogenic transformation during the development. LAMA2 another gene extends from 6q22-q23, encodes Laminin, an extracellular protein which is a major component of the basement membrane. Laminin helps to mediate the attachment, migration, and organization of cells into tissues during embryonic development by interacting with other extracellular matrix components 14. Szafranski et al. (2015) studied six unrelated patients with non-recurrent deletions within 6q21-6q22.31 and established that the loss of this region results in a neuro-developmental disorder, characterized by language delay, cognitive deficits, epilepsy, and tremors with variable expressivity. The critical region at 6q22.1 also harbors two piRNAs and a lncRNA gene which is an antisense RNA that may regulate expression of the neighboring NUS1 gene 15. The majority of piRNAs have a germline-restricted expression where they epigenetically regulate transposition events in humans leading to neural abnormalities 16. Hence, disruption of the gene or group of genes at the breakpoints 4q35 and 6q22 suggests a possible cause for embryonic lethality in women experiencing RPL.

As there is a crucial role of chromosomal anomalies in first-trimester pregnancy loss, all the couples who encounter RPL should be evaluated for the cytogenetic abnormalities. Further, the carriers of chromosomal translocation with pre-gestational or gestational infertility should be counseled on chromosomal breakpoints and the various technologies available for assisted reproduction. A pre-implantation genetic diagnosis can be suggested for couples who are at risk of transmitting a genetic disease or structural chromosomal abnormality to their offspring. All the siblings who inherited the balanced translocation were given extended genetic counseling.