Journal of Digestive Disorders and Diagnosis

Primary malignant melanoma arising from the parotid gland is extremely rare and only sporadic cases have been described. This entity is characterized by delayed diagnosis, poor prognosis and controversial pathogenesis.

We report a case of primary malignant melanoma of the parotid gland in a 54-year-old man. The initial diagnosis, made by fine needle aspiration cytology, was malignant tumor without precision. Radical parotidectomy was performed. Diagnosis of primary melanoma of the parotid gland was confirmed by immunochemical analysis revealing positive staining for S-100, HBA-45 and Melan A. Computed Tomography and whole-body 18F-FDGPET/CT image were made to evaluate metabolic and morphologic characteristics of the primary melanoma, to identify potential systemic metastasis at early stage and to exclude primary melanoma elsewhere in the body.

The clinical, pathological, immunohistochemical and the role of combined FDG PET/CT features of this lesion are discussed compared to a literature review.

Primary malignant melanoma (PMM) arising from the parotid gland is extremely rare and only sporadic cases have been described. It is characterized by delayed diagnosis, poor prognosis and controversial pathogenesis. Nevertheless, PMM should be considered in the differential diagnosis of parotid malignancy tumors. We present a 54-year-old man with PMM of the parotid gland confirmed by immunohistochemical findings and integrated 18F-FluoroDeoxyGlucose positron emission tomography/computed tomography(18F-FDG PET/CT) to exclude primary melanoma elsewhere in the body. The clinic-pathological, immunohistochemical and the role of 18F-FDG PET/CT features of this lesion are discussed with a literature review.

A 54-year-old man consulted for right retro-auricular mass, painless but pruritic, lasting for two months and growing fast. No significant findings in the medical or surgical history. Physical examination revealed a right retro-auricular mass, fixed to the underlying soft tissues measuring 4 x 3 x 3 cm3. The mass had a fluctuating center and there were signs of inflammation around it. Head and neck examination didn’t show any abnormalities or lymphadenopathy. Oto-Rhino-Lyryngologycal and whole-body examinations were unremarkable. Laboratory studies resulted within normal limits. A short course of antibiotic therapy was initially given without any results. Fine needle aspiration (FNA) cytology revealed parotid malignant tumor without precision. The chest-X ray was normal. Head and neck CT with intravenous contrast material showed a focal lesion in the right parotid gland with size 3 × 2 cm2, well-defined, heterogeneous with peripheral contrast enhancement and necrotic center. No evidence of pathologic lymph nodes in or around parotid gland or bony involvement (Figure 1) was found.

Figure 1. Computed Tomography of the neck with intravenous contrast material revealed a focal lesion in the right parotid gland with size 3 × 2-cm. The mass was well defined, heterogeneous, with peripheral contrast enhancement (large white arrow). It had a central attenuation value of 13 HU, suggesting a necrotic mass without bony involvement (thin black arrow). 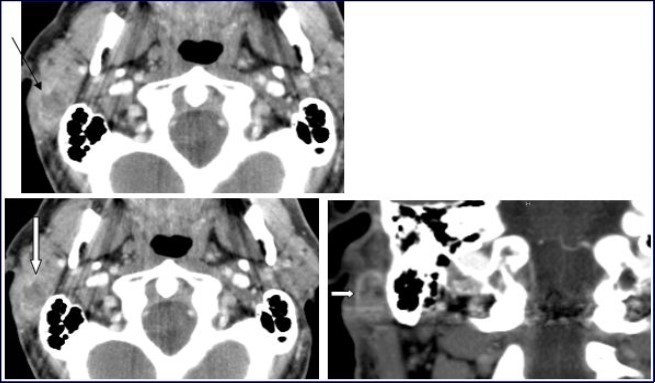 Total right parotidectomy with neurolysis of the facial nerve was performed.

A macroscopic exam revealed a tumor of the parotid, measuring 1 x 4 cm2, up slices of deep and shallow section in the parotid. Histologically, tumor cells were very large, mostly non-cohesive with a marked pleomorphism. The core was composed of enlarged nucleoli and often pushed the periphery. Necrotic tumor nodule was widely dissected by thick fibrous septa. The limits of the gland were partly lined with well-defined fibrosis and very little lymphoid tissue, partially infiltrative in the fibro-fatty tissue surrounding without direct contact with serous acini.

PET-CT with 18F-FDG injection of iodinated contrast post surgery showed an intense and diffuse hyper metabolism at the surgical site in the right parotid and discreetly moderated hypermetabolic lymph nodes in the ipsilateral lymph nodes areas II and III. No morphological or metabolic argument for tumor was demonstrated (either primary or secondary) on the whole-body (Figure 2).

Figure 2. A and B: PET-CT with 18F-FDG injection of iodinated contrast showed: A.Intense and diffuse hyper metabolism at the surgical site in the right parotid (large white arrow) and discretely hypermetabolic lymph nodes in the ipsilateral lymph nodes areas II and III (thin black arrow). B. Lack of morphological or metabolic arguments for primary or secondary manifestation of malignant melanoma of the others structures examined. 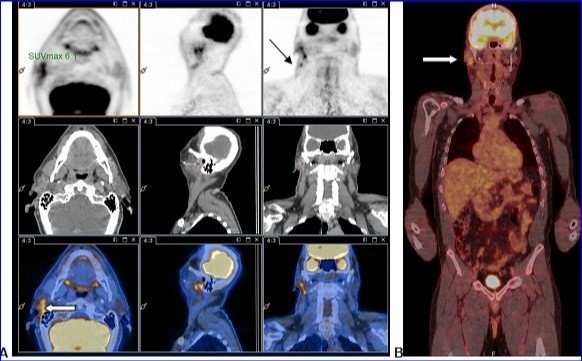 Immunohistochemically, cells were diffusely positive for S100 protein and focally for HMB45 and Melan A. They were negative for MNF116, desmin, smooth muscle actin (SMA) and CD45. The mitotic proliferation index estimated by the Mitotin index (MIB) was 60 to 70%. Three periparotidal lymph nodes were without injury. Skin result was normal (Figure 3).

Figure 3. The immunohistochemistry for both S100 and HMB 45 were positive establishing diagnosis of primary malignant melanoma of the parotid. 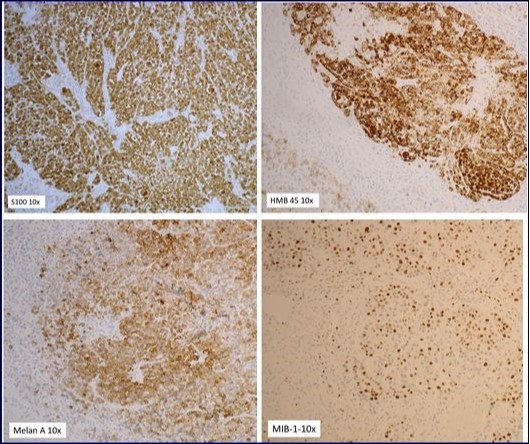 A diligent search for dermal or non-dermal tumor of the total body was performed with a negative outcome.

Based on these clinical and radiological criteria, diagnosis of PMM of the parotid was made without local or distant metastases and the patient received complementary radiotherapy.

Primary malignant melanoma arising in the parotid gland (PMMP) is extremely rare and account for about 0,68% of the malignant neoplasms of the parotid 1. Only few sporadic cases have been reported in the literature. The majority of parotid melanoma occurs as metastasis from cutaneous or mucous sites of the head and the neck regions including the scalp, mucous membranes of the nose, the paranasal sinuses, or the throat 2. These metastasis result either from intra-lymphatic spread of the primary tumor to the gland or from direct extension of the melanoma from the adjacent soft tissue 3.

Multiple hypotheses regarding its pathogenesis have been postulated; however, exact etiology remains unclear. According to these hypotheses, the melanocytes derived embryologically from the neural crest 4 and the melanoblasts are present in the parotid tissue and in the invagination of oral epithelium during the development of the gland. The melanin is also present in the ductal and acinar cells of parotid 5.

In 1997, Takeda et al demonstrated the presence of melanocytes in the intralobular duct of parotid gland and advocated that these cells potentially served as an origin for parotid primary melanoma 6. In 1961, Greene and Bernier have published 7, several criteria for the diagnosis of primary parotid malignant melanoma (PPMM) and in 1993 Woodward has established the following criteria (Table 1) to assert the intra-glandular primary melanoma character 8.

Patients classically present with an indolent and firm parotid mass that tends to extend slowly to surrounding tissues making clinical distinction from other malignancies very difficult. Dermal changes such as erythema and ulceration or pain and facial nerve palsy caused by local tumor compression or infiltration of advancing process are observed 9.

FNA biopsy is a helpful adjunctive test for diagnosis but its utility remains controversial 10. Only histological and immunochemical findings can establish the diagnosis of PMMP. As seen with our patient, the initial diagnosis by FNA was a malignant tumor without precision and immunohistochemical analysis confirmed the PPMM.

Histologically, tumor cells are large, mostly non-cohesive with abundant eosinophilic cytoplasm, a marked pleomorphic nucleus and prominent nucleoli. The core is compsed of enlarged nucleoli and often pushes the periphery. Immunohistochemically, cells are diffusely positive for S100 protein and HMB45. Melan A is positive in 80% and MiTF in the 90% of melanoma 11.

On CT, generally, the mass is intra-parotidal, infiltrative, either homogeneous or heterogeneous and central necrosis is found in some cases. The majority of malignant melanomas are associated with local or regional lymph node metastases 12.

CT of the chest and abdomen is still indispensable in the conventional staging investigation of melanoma. However, limitations of CT have been recognized in detection of small pulmonary or liver metastases less than one cm 13. Currently, whole-body 18 fluorodeoxyglucose (18F-FDG) PET imaging has been shown to be superior to CT in the assessment of pulmonary and lymph nodes metastases and can also detect primary melanoma up to 6 months earlier than conventional imaging 14. However, 18F-FDG is not tumor-specific; the isotope being also taken up by benign masses such as Wharton tumor and inflammatory cells 14. Because of the physiologic uptake of FDG by the brain, 18F-FDG PET has limited utility for brain metastases screening.

During the last decades, combined 18F-FDG PET/CT has fundamentally changed the approach of images interpretation in oncology indications and now plays key roles in detection, staging and monitoring of therapy as well as differentiation of benign from malignant lesions 15.

According to Amercican College of Radiology (ACR) , Society of Nuclear Medecine (SNM), Society of Computed Body Tmography (SCBT) and MR, 18F-FDG PET/CT including both upper and lower extremities and head for patients with MM allows early diagnosis of primary tumor, lymph nodes involvement, distant metastases as well as recurrent disease 16.

Although, the CT or 18F-FDG PET/CT appearance of PMMP may be nonspecific, placing the morphological and metabolic findings in clinical context and assessment of immunohistological findings is helpful for establishing the diagnosis. Integrated 18F-FDG PET/CT helps to determine the presence of primary parotid melanoma or in the other surrounding soft tissue of the neck and head and subsequent lymph nodes metastases and therefore helps in pre-and post-surgical management.

PMMP must be differentiated clinically, radiologically and immunohistochemically from other malignancies, especially adenosarcomas, squamous cell carcinoma, parotid lymphoma and sarcoma of the parotid. Additional differentiation must be made with melanoma metastases arising in another site of the body 17.

In our case, the diagnosis of PMMP was based on criteria proposed by Woodward;18F-FDGPET/CT whole body scan and immunohistochemical features with positivity for S100 protein and HMB-45.

Surgical resection is the only curative treatment of melanoma 18. Efficacy of chemotherapy and radiation therapy is difficult to evaluate in the limited number of cases of parotid PMMP.

The prognosis is variable although the common opinion is that metastases of another primary melanoma have a better prognosis than PMMP 19.

PMMP is extremely rare and characterized by late diagnosis and poor prognosis. However, this entity should be considered in differential diagnosis of infiltrative parotid tumors. WW’s criterias, whole-body integrated 18F-FDG PET/CT and immunohistochemical features are the cornerstones of early diagnosis, staging and management of this entity.