Journal of Digestive Disorders and Diagnosis

Letter To The Editor :

Cytomegalovirus (CMV) usually causes opportunistic infections in immunocompromised patients. Active CMV disease occurred in up to 36% of critically ill patients and may affect their health outcomes 1, 2. We present upper gastrointestinal (UGI) bleeding with different endoscopic features of CMV esophagitis in two patients hospitalized in intensive care units (ICUs) - one immunocompetent patient who stayed in ICU for a critical illness and a second patient with colon cancer who received tegafur/uracil chemotherapy.

A 77-year-old woman with diabetes mellitus and coronary artery disease had short of breath in recent days. Cough with sputum, mild chest tightness, and poor appetite were noted. She was admitted to the ICU and sputum cultures yielded carbapenem-resistant Acinetobacter baumannii(CRAB). Antibiotic therapy with doripenem plus sulbactam was given for 10 days. Meanwhile, unstable hemodynamic status and upper gastrointestinal bleeding occurred. Panendoscopic study showed diffuse ulcers of whole esophagus (Figure 1A). The CMV- polymerase chain reaction (PCR) results for blood and stool samples were positive. The CMV antigenemia showed 23 positive cells per 200,000 macrophages. Biopsy of esophageal ulcers revealed some large cells containing eosinophilic inclusion, which was positive in the immunohistochemical staining for CMV. Ganciclovir was added and esophageal bleeding stopped soon. One week later, nevertheless, the patient passed away in the hospital due to worsening CRAB pneumonia.

Figure 1. Endoscopy is showing diffuse ulcers of whole esophagus (1A) and pseudomembranous lesions with irregular yellowish patch along upper and lower esophagus (1B). 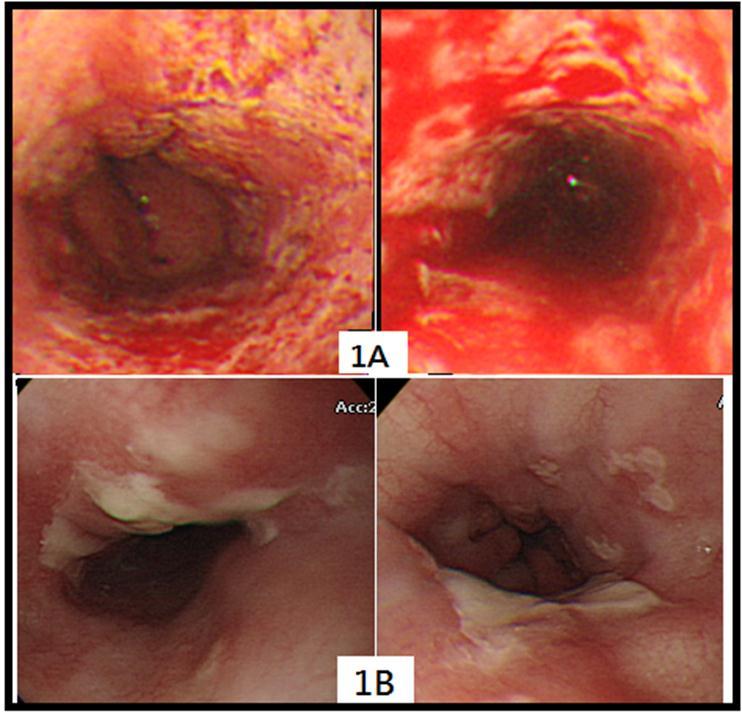 A 75 y/o man of diabetes and colon cancer post hemicolectomy had received tegafur / uracil chemotherapy. He suffered from nausea, vomiting and hematemesis for one week. The laboratory data showed leukocytosis and panendoscopy revealed pseudomembranous lesions of the esophagus (Figure 1B). Esophageal biopsy showed CMV infection. The blood and stool CMV- PCR results were positive. A viral load of blood sample was 12,200 IU/mL. After ganciclovir therapy, the esophageal bleeding subsided and he was uneventfully discharged.

The CMV esophagitis is rarely highlighted in critically ill patients. The most common lesions were well-circumscribed ulcers, usually located in the middle to distal parts of the esophagus 5. As we know, the pseudomembranous CMV lesions have been seen in the colitis but not reported in the esophagitis 3. The intensivists should early diagnose the active CMV disease and to assess those patients who might preferably be given antiviral treatment.

We declare no conflict of interest and financial support regarding this letter.

The above study has been granted exemption from review by the Institutional Review Board of Chi-Mei Medical Center (IRB Serial No. 10410-005).