Preface Frequently, benign bone tumours are an incidental discovery wherein clinical symptoms are contingent to tumour location and magnitude and manifest as localized pain, swelling, skeletal deformities or pathologic fracture. Radiographic imaging is a cogent methodology of discerning the neoplasms.

Benign bone tumours are a frequent, incidental discovery wherein clinical symptoms are contingent to tumour location and tumour magnitude. The neoplasms manifest on-site pain, localized swelling, skeletal deformities or pathological fractures. Radiographic imaging is a cogent methodology for discerning the neoplasms. Enchondroma is a benign, lobulated neoplasm engendered from hyaline cartilage and is commonly discerned within medullary cavity of bones of endochondral origin. The neoplasm lacks a definitive pattern of genetic inheritance.

Enchondroma is an intraosseous, cartilaginous neoplasm with an estimated prevalence of 3% of comprehensive bone tumours and around 13% of benign bone neoplasms. Enchondroma is usually represented as a solitary (70%), centric, metaphyseal neoplasm predominantly occurring within miniature, tubular bones of hands or feet or long bones such as femur or humerus although no site of tumour emergence is exempt. The neoplasm is exceptionally denominated within thumb or ribs 1, 2.

Classically, enchondroma arises during the second decade between 15 years to 35 years although no age of disease emergence is exempt. Tumefaction may also appear within childhood. The neoplasm depicts an equivalent gender prevalence1, 2.

Enchondroma is frequently discerned within miniature tubular bones of the hand. Classically, enchondroma is situated within proximal metaphysis of proximal phalanx with a predilection for ulnar surface of the hand 1, 2.

Expansible, medullary cartilaginous neoplasms may terminate in pathological fractures due to encroachment upon the cortical bone. Solitary enchondoma is accompanied by malignant transformation in around <1% instances. Malignant metamorphosis into a chondrosarcoma usually occurs following skeletal maturity 1, 2.

Tumefaction emerges from ectopic rests of growth plate cartilaginous cells or chondrocytes which proliferate, enlarge and persist during adulthood although further evolution ceases. A displaced growth plate may generate an enchondroma1, 2.

The neoplasm is configured of lobules of hyaline cartilage enveloped by perichondrium-encased bone. Tumefaction can be hyper-cellular with bi-nucleate tumour cells. Myxoid change, foci of calcification and endochondral ossification are discerned. Necrosis may ensue on account of avascular cartilaginous component. Tongues of bone appear to extend into subjacent cartilage demonstrating a sharply defined interface confined to the growth plate4, 5.

Benign, juxta-cortical enchondroma arising within miniature, tubular bones as the hand may be hyper-cellular and demonstrate cellular and nuclear atypia 5. 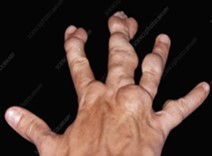 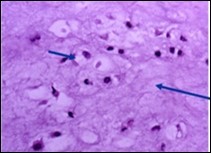 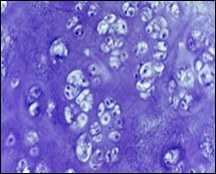 Enchondroma requires a distinction from conditions such as

Tuberculous dactylitis is associated with pain at initial presentation. Epithelioid cell granulomas are intermingled with focal areas of caseation necrosis and giant cell reaction. Langerhans giant cells may be discerned 5, 6.

Epiphyseal dysplasia usually arises in neonates and children. Multiple joints are simultaneously incriminated. Epiphyseal cartilage is composed of multiple discreet units of chondrocytes segregated by clefts imbued with fibroblast like cells. The cartilaginous component is enveloped within a territorial capsule. Continuity of epiphyseal cartilaginous matrix is disrupted with generation of chondrons or mosaic of chondrocytes 5, 6.

On plain radiography, enchondroma depicts a varied appearance which is contingent to location and extent of tumour calcific deposits. The neoplasm may simulate a medullary bone infarct.

Typically, enchondroma appears as a well-defined, solitary defect confined to the metaphyseal region. Centrally situated lesions display well-circumscribed areas of bone rarefaction with a circumscribing, expanded bone cortex, frequently within the diaphysis. Bone cortex is preserved although thinned out. Pathologic fractures may be discerned 7, 8.

Centric neoplasms occur as well-circumscribed lesions with rarefaction of bone diaphysis and expanded bone cortex. Tumours with extensive calcification may simulate a bone infarct, islands of mature bone or a lytic lesion7, 8.

Computerized tomography (CT) can be suitably adopted for discerning mineralization of bone matrix and continuity of bone cortex.

Peripheral and spatial image enhancement is observed upon gadolinium contrast imaging. Enchondroma can be suitably differentiated from a bone infarct upon computerized tomography and magnetic resonance imaging 8, 9.

Periostin is a stromal-related protein and is absent in enchondroma. In contrast, alpha-methylacyl-CoA racemase (AMCR) is a mitochondrial and peroxisomal enzyme which is discerned in a majority of enchondromas8, 9.