An anatomical variant of the Stafne bone cavity (SBC) located in the right subcondylar region of the mandible is presented. Such an occurrence of the SBC in this region near the parotid gland is considered rare and poses a diagnostic challenge for the dentist and radiologist. Knowledge of head and neck clinical anatomy and imaging studies such as plain film panoramic radiographs and cone beam CT scans can assist the clinician in arriving at a correct definitive diagnosis without surgical intervention.

Stafne bone cavity (SBC) is classically described as an asymptomatic depression or concavity localized on the medial surface of the posterior mandible between the inferior alveolar canal and inferior border.1It is considered a pseudocyst as the lesion does not have an epithelial lining. Although the exact morphogenesis is not known, it is hypothesized that during embryological development of the mandible from Meckel’s cartilage, the submandibular gland tissue is entrapped that leads to an osseous concavity on the medial surface of the mandible. 1,2

Radiographic features (Figure 1) of the SBC are a well-circumscribed unilocular, round or elliptical shaped radiolucency in the posterior mandible that are approximately 10 to 30mm in length. 1,3,4The radiographic lesion is often incidentally discovered when the patient completes a routine panoramic radiograph at the dentist office and does create concern for the dentist as it can mimic a cystic lesion.3,5,6 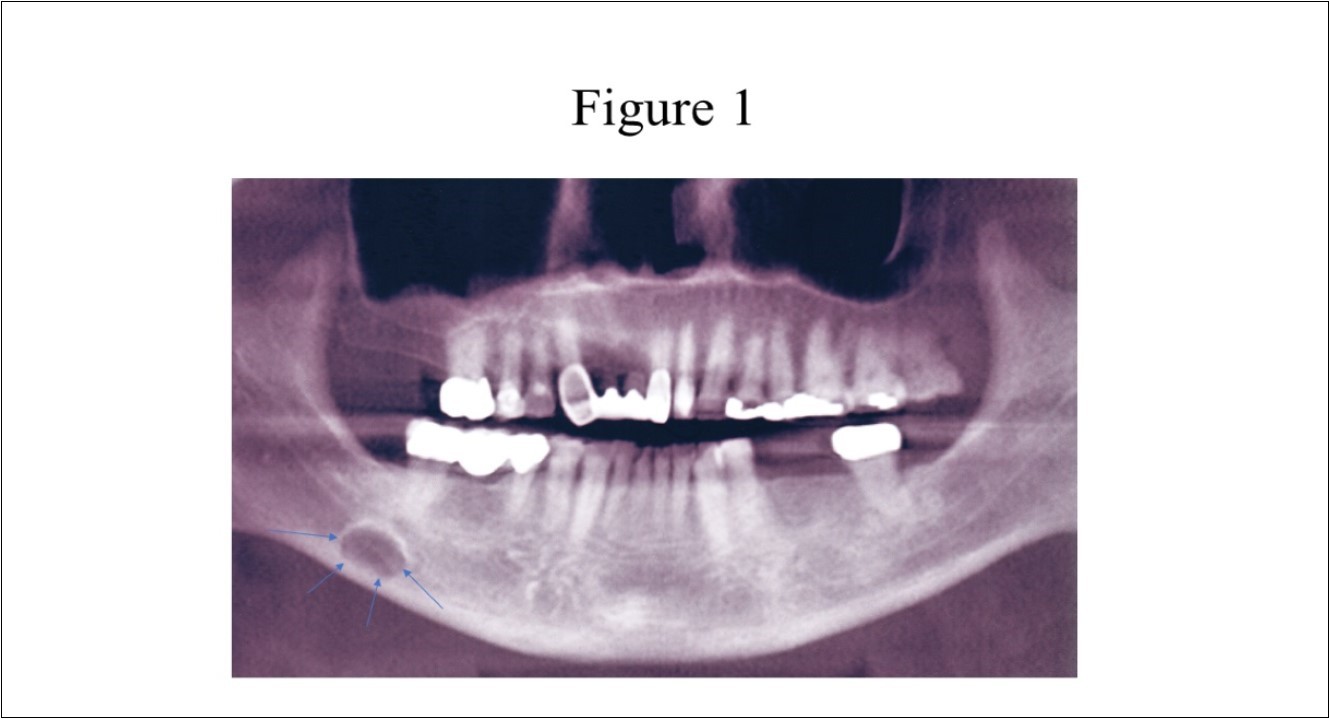 The goal of this case report is to present a variant of the Stafne bone cavity localized to the medial surface of the right subcondylar neck of the mandible in our patient discovered during completion of a routine panoramic radiograph.

A 63-year old asymptomatic Asian male presented to the office upon referral from his dentist for evaluation of a radiolucent lesion in the right subcondylar neck of the mandible. The patient stated that the radiographic lesion was incidentally discovered when the panoramic radiograph was completed at his last routine annual dental examination. The patient’s medical history was significant for hypertension. Current medications prescribed by his physician consisted of metoprolol XL, 200mg and Lipitor 40mg, daily. No history of malignancy was reported by the patient.

Maxillofacial examination was unremarkable. No facial swelling, masses or asymmetry was observed. The TMJ examination was normal. No pain or tenderness to digital palpation was observed in the right preauricular region. Oral examination of the patient was unremarkable. No trismus was observed as the maximal interincisive opening was greater than 40.0mm. No anterior or posterior open bite was observed. Imagining studies to rule-out intraosseous neoplastic lesions and arrive at a definitive diagnosis consisted of a panoramic radiograph and cone beam CT scan (120 kVp, 5 mA, 7.4 sec). Panoramic radiograph revealed a unilocular, well-circumscribed radiolucency in the right subcondyalar region of the mandible that was close to the posterior border of the condylar neck (Figure 2). Cone beam CT scan (i-CAT FLX, Imaging Sciences, Hatfield, PA) imaging revealed a well-defined unilocular, elliptical shaped radiolucent lesion on the medial surface of the right subcondylar neck of the mandible (Figure 3, Figure 4, Figure 5). The elliptical shaped unilocular lesion involved almost the entire horizontal dimension of the subcondylar neck (Figure 4). Figure 5 shows the three-dimensional CT scan reconstruction (i-CAT FLX, Imaging Sciences, Hatfield, PA) of the medial defect in the subcondylar region of the mandible. Based on knowledge of clinical head and neck anatomy and imaging studies, no treatment was indicated as the diagnosis was consistent with a variant of a Stafne bone cavity of the right subcondylar neck near the parotid gland and not a pathological condition. The patient was informed about the risk of condylar neck fracture due to the critical size of the SBC.

Figure 2. Panoramic radiograph reveals a unilocular radiolucency in the right subcondylar neck of the mandible which is considered a variant of the classic SBC described by Dr. Stafne. 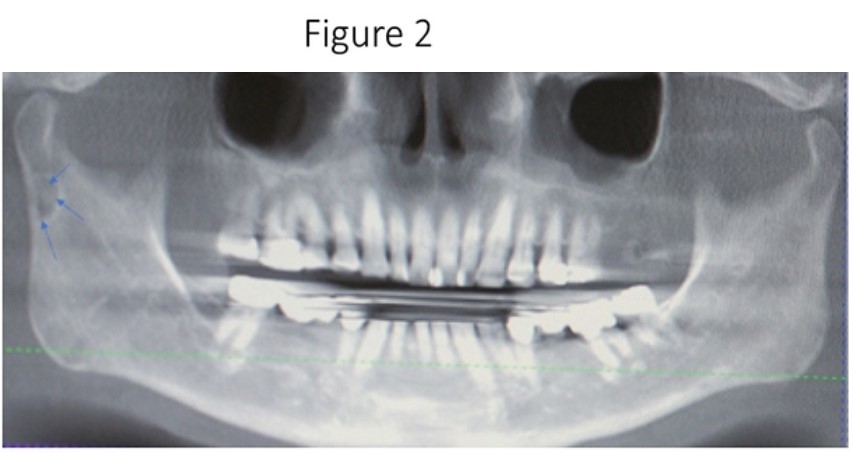 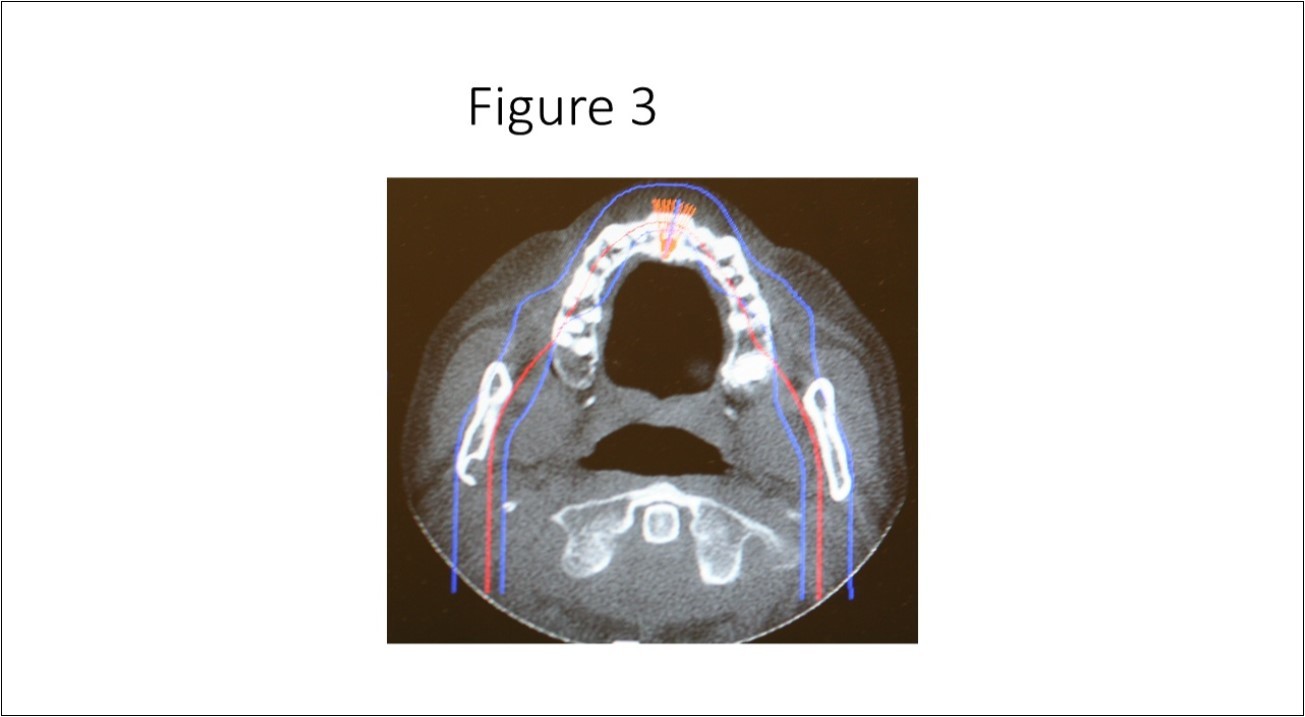 Figure 4. Cone beam CT TMJ sagittal views illustrate osseous defect on medial cortex. Note the thinness of the cortex that places the patient at risk for fracture of the condylar neck. 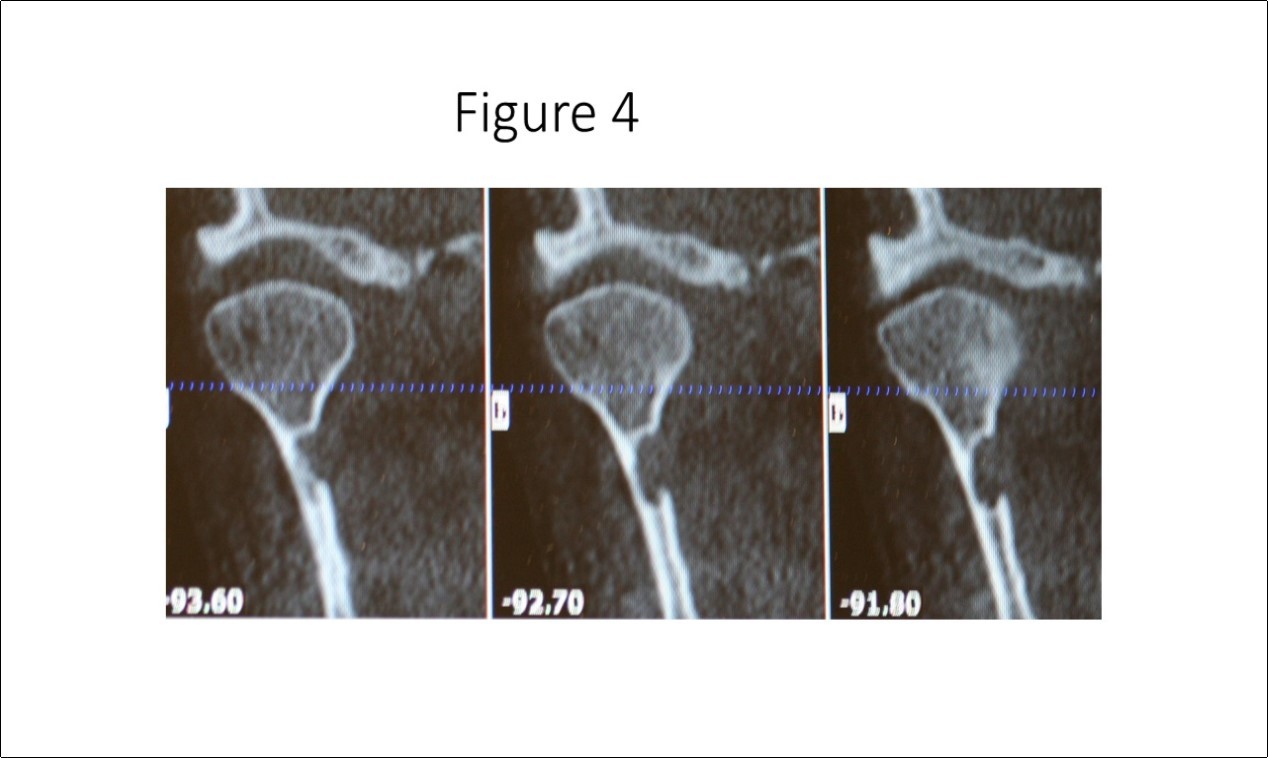 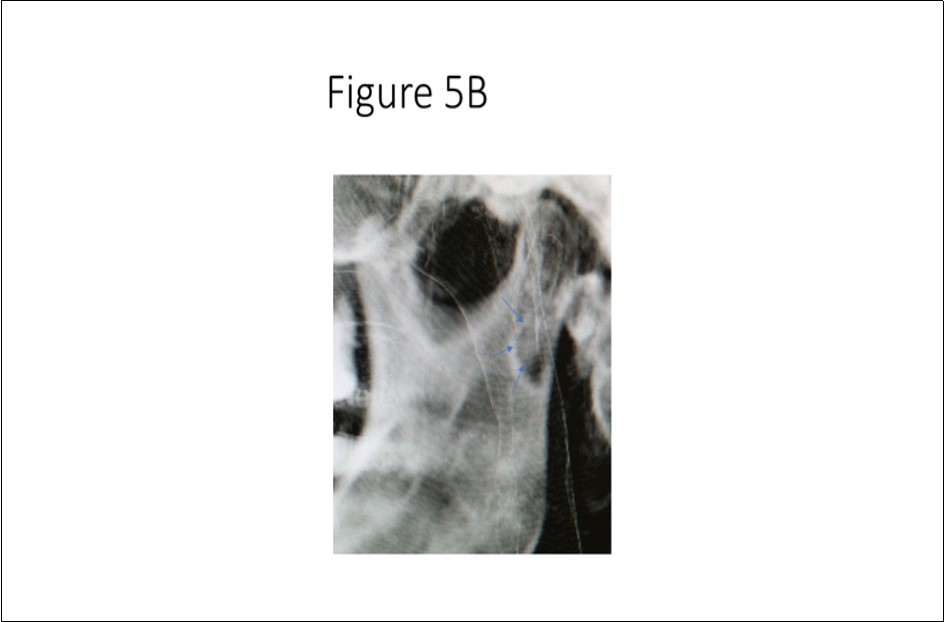 Definitive diagnosis of SBC is made by imaging studies as they provide accurate anatomic information without surgical intervention. Radiographically, the Stafne bone cavity is usually observed between the inferior alveolar canal and inferior border of the posterior mandible from the ramus to the premolar regions on a panoramic radiograph.3,4,5,6However, there are variances in the location of the SBC. An atypical variant in the subcondylar region of the mandible near the parotid gland was first reported by Wolf 9and later Barker.10Both authors described the variant as a “parotid or ramus” variant of the Stafne bone cavity. In 2004, Campos et al 11using cone beam CT scan technology reported a parotid gland variant of the SBC as a salivary gland defect. They hypothesized that the osseous concavity was due to failure of ossification of the mandible and not the salivary gland.

Intraosseous radiolucencies observed in the subcondylar region of the mandible are rarely observed radiographically. For the clinician, identification of and diagnosis of such lesions is often challenging. The differential diagnosis of SBC may include the following: odontogenic cyst, aneurysmal bone cyst, traumatic bone cyst, osteoporotic bone marrow defect, ameloblastoma, myxoma, hemangioma, multiple myeloma, giant cell tumor and metastatic disease.5,21,22However, deposition of fat, vascular, and salivary glandular tissue herniated into the osseous concavity should also be considered in the differential diagnosis. In our case report, based on the anatomic location, imaging findings, a normal examination in our asymptomatic patient, the diagnosis was consistent with a rare variant of the SBC localized to the subcondylar region of the mandible. No treatment is indicated for this anatomic variant of the SBC. However, when the diagnosis is uncertain, magnetic resonance imaging and biopsy should be considered.3,20,21

An anatomical variant of the Stafne bone cavity (SBC) located in the right subcondylar region of the mandible is considered rare and poses a diagnostic challenge for the clinician and radiologist. Knowledge of clinical anatomy, and imaging studies such as plain film panoramic radiographs and cone beam CT scan can assist the clinician in arriving at a correct definitive diagnosis without surgical intervention.