Journal of Biotechnology and Biomedical Science

The aim of present study was to describe the graphical technique how to go from Hill concentration constant to Michaelis constant.

There exist enormous amounts of research findings on the activity of various enzymes. As a result, these days a greater attention is focused on determination of the mechanisms of enzymatic reactions and kinetic constants. To find the constants for monomeric enzymes for which the dependence of the rate of a reaction, catalyzed by these enzymes, on substrate concentration is subjected to the hyperbolic kinetics 1, 2, 3, the Michaelis-Menten equation has to be used:

Vis the rate of a reaction catalyzed by the enzyme;

Vmax is maximum rate of enzymatic reaction (i.e. maximum value of the rate when S→∞);

Km is the Michaelis constant (Michaelis concentration), which is determined graphically as substrate (S) concentration at which V = 0.5Vmax and used for characterization of the affinity of the enzyme to a substrate.

n is Hill coefficient used for assessment of S-shape functions.

As to stable soluble enzymes of simple structure, the enzymatic activity can be determined in cell-free extracts of microorganisms. But some enzyme complexes can not remain active during cell destruction. So, the activity of these enzymes of multi-subunit structure cannot be determined in cell-free extract. The activity of these enzymes is assessed indirectly by the response of intact cells to enzyme substrate. This refers, for instance, to benzoate 1,2-dioxygenase. The activity of this enzyme is estimated by change in oxygen consumption by whole cells after injection of enzyme substrate (polarographic determination) 6, 7. A biosensor method can be also used in comparative assessment of dioxygenase activity. It is known, that oxygenase component of dioxygenase system from Pseudomonas putida mt-2 has an (alpha beta)(3) subunit structure 8. Notwithstanding multi-subunit structure of dioxygenase, the dependence of V vs. S could be of hyperbolic and/or S-shape form both at polarographic and biosensor determination 9.

How to compare the enzymes the kinetics of which is different? In a series of papers for the comparison of enzyme activity, the investigators went from Hill constant to Michaelis constant using the calculation formula. Hence, the use of the constants of hyperbolic dependency is necessary to calculate the inhibition constants 10.

Even having not estimated calculation formulas described in literature to go from S0.5 to Km it should be noted that complex mathematical manipulations are difficult for understanding. So, in this paper, a simple in use approach is suggested to go from Hill constant to Michaelis constant.

Negative kinetic cooperativity was observed, for example, for heterogeneous enzymatic preparations. Examples of this type of deviation from hyperbolic dependency are shown in 4. The author has no practical expertise in conducting a research under mentioned conditions, although there are prerequisites for implementation of negative cooperativity in the experiment. 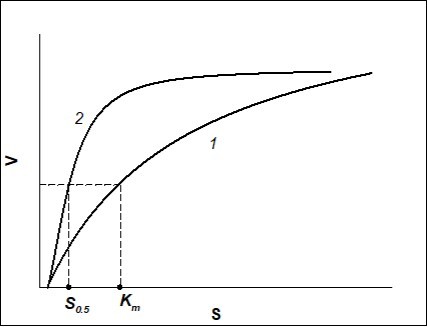 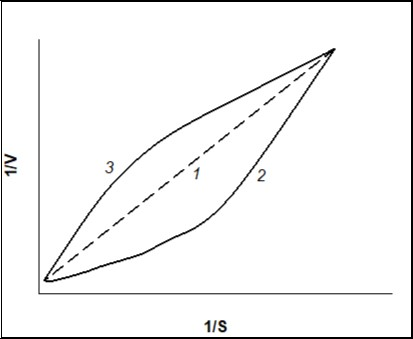 To go from S0.5 to Km, it is enough to plot a line similar to line 2 in Figure 3 using Sigma Plot program. The line has to pass through a point of S-shape curve which has maximum value of 1/V. This is a reciprocal value of the minimum rate (1/Vmin) of enzyme-substrate reaction, which can be detected. 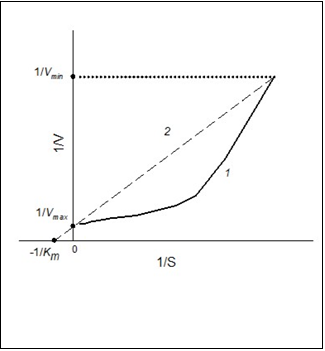 As a matter of fact, the line should pass through a cluster of points which are reciprocal to Vmax: this is a saturation area of the curve V vs. S. The line has to cross the axis 1/V at the point 1/Vmax, where Vmax is a known value. Vmax is the constant of the sigmoidal dependency (Hill equation). The equation of the plotted line is 1/V=a + b1/S, where a and b are positive values. In this case, 1/a = Vmax, and the required Michaelis concentration will be obtained when 1/V=0: Km = b/a. So, the estimated value of the Michaelis constant will be calculated for the process with the catalytic activity which is the same for the process with Hill kinetics. The example how to go from S0.5 to Km is given below.

With the graphical approach it is rather easy to go from concentration constant of Hill equation to Michaelis concentration.