Nevus comedonicus is a condition of obscure aetiology, a category of epidermal nevus or an origin as a hamartoma primarily derived from mesodermal segments of the pilosebaceous unit. Genetic mosaicism can be proposed as an aetiological factor for emergent nevus comediconus 1.

Estimated prevalence of nevus comedonicus varies from 1 : 45000 to 1 : 100,000 individuals. The condition is devoid of a specific gender or racial predilection and male to female proportion of disease emergence is equivalent. Nevus comedonicus can emerge as a congenital condition or within the neonatal period in an estimated 50% subjects and majority of instances are discerned prior to 10 years1, 2.

Chromosomal mutation of fibroblastic growth factor receptor 2 (FGFR2) along with enhanced enunciation of interleukin 1- alpha are cogent factors within the pathogenesis of nevus comedonicus. Gamma- secretase and filaggrin are also incriminated. Inter-relation of fibroblastic growth factor (FGF) and fibroblastic growth factor receptor 2 (FGFR2) is a critical component of mesenchymal- epithelial interaction, particularly in the genesis of pilo-sebaceous unit. FGFR is composed of a family of tyrosine kinase receptors wherein FGFR2b is singularly situated within the epithelial cells, especially epidermal keratinocytes and sebocytes. Activation of FGFR2 signalling pathway in association with enhanced manifestation of interleukin 1- alpha is delineated with the occurrence of nevus comedonicus2, 3. Somatic mutations, as cogitated with Ser252Trp substation, can be exhibited in individuals with segmental acne. Gamma- secretase, detected within hair follicular epithelium, is also implicated in the origin of nevus comedonicus, as the absence of cogent enzymes ensures a comprehensive conversion of hair follicle into epidermal cysts.

Somatic mutations within NEK9 are implicated in the genesis of nevus comedonicus, a gene which significantly regulates follicular homeostasis. Genomic mutations of NEK9 are accompanied by an enhanced phosphorylation at Thr 210 position, thereby indicating the activation of NEK9 associated kinase2, 3.

Configuration of comedones in nevus comedonicus are associated with adjunctive modifications such as decimated markers of follicular differentiation and ectopic enunciation of keratin 10 besides an upregulation of ABCA123.

Nevus comedonicus delineates specific subtypes such as a) a non pyogenic form with acne-like characteristics, additionally delineated as Munro’s acne nevus, which can be considered as a condition distinct from nevus comedonicus4, 5.

b) a category demonstrating the articulation of cysts, pustules, papules and abscesses in diverse stages of configuration.

Sufficient mechanical stress is contemplated as a trigger for the occurrence of hidradenitis suppurativa in concurrence with nevus comedonicus.

A cogent tissue specimen demonstrates typical features of comedones as follicular ostia distended and impacted with keratin. Significant histological manifestations are the occurrence of enlarged, grouped, distended follicular ostia demonstrating an absence of hair shafts along with impaction of laminated keratin. Base of the follicular invaginations may or may not delineate singular, rudimentary glandular structures. Miniature cysts, cystic invaginations and occasional enlarged cysts can be encountered. Cystic articulations are diverse and preponderantly layered by keratinizing, stratified squamous epithelium. Hyperkeratosis or epidermolytic hyperkeratosis and acanthosis of superimposed epidermis can concur although the lesion is devoid of parakeratosis or dyskeratosis5, 6. 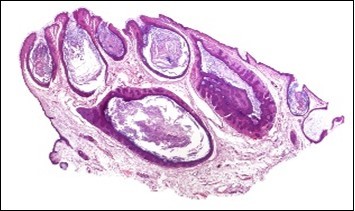 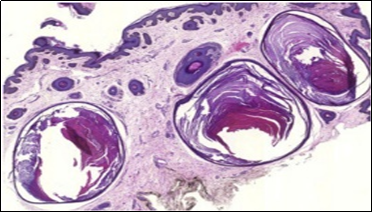 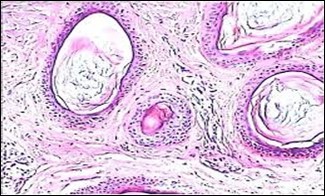 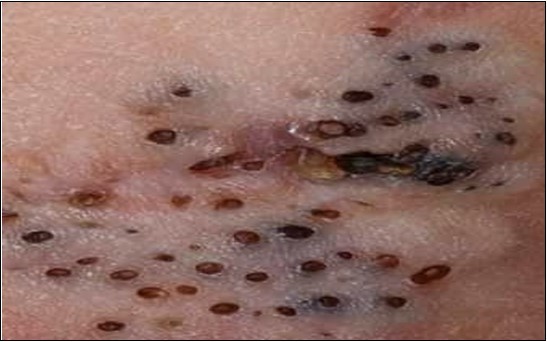 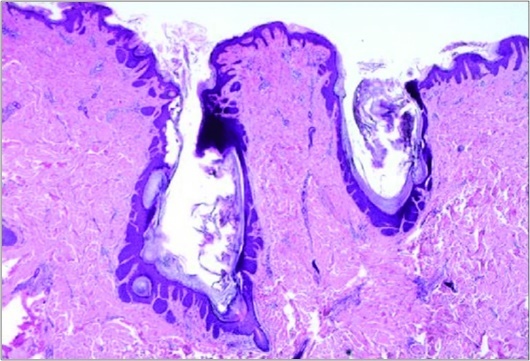 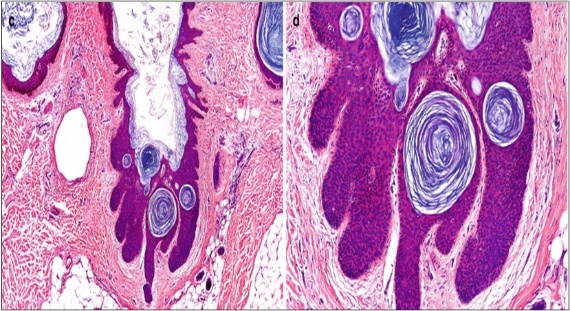 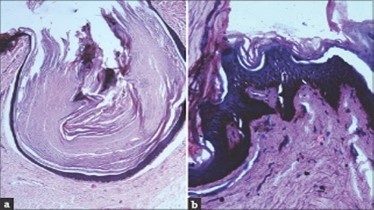 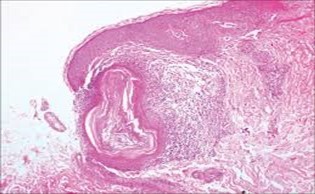 Atypical representations of nevus comedonicus require a demarcation from adjunctive conditions such as atypical acne, segmental acne or associated mosaic acneiform disorders such as chloracne and Favre- Racouchot syndrome, denominating nodular elastosis with cysts and comedones. Disorders such as familial dyskeratotic comedones mandate a segregation from nevus comedonicus and are cogitated as exceptional, autosomal dominant, inherited conditions with characteristic emergence of hyperkeratotic comedonal lesions. Histological assay demonstrates the occurrence of comedones with associated dyskeratosis6, 7.

Generally, a clinical discernment of nevus comedonicus is adequate on account of preliminary age of disease onset and a typical morphology. Systematic evaluation of central nervous system, skeletal system and ocular structures are necessitated to exclude nevus comedonicus syndrome7.

Spontaneous resolution of nevus comedonicus is unknown. Frequently, the superimposed epithelium is hyperkeratotic and occasionally acanthotic, thus extraction of a comedo is difficult, in contrast to removal of acne comedones.

The essentially benign nevus comedonicus may not mandate the adoption of aggressive treatment modalities, except in complex instances or for aesthetically pleasing outcomes8, 9.

Treatment is primarily adopted for cosmetic reasons or for alleviation of complications such as configuration of cysts or abscesses. Cosmetic management for post- inflammatory scarring may be necessitated.

Topical and systemic retinoids can be adopted singularly or in combination with topical steroids for inciting anti-inflammatory functions.

A pore strip can be successfully employed to treat keratin plugs8, 9.

Conservative therapeutic options comprise of application of emollients and moisturizers, topical corticosteroids in inflammatory lesions and keratolytics as salicylic acid or 12% ammonium lactate solution. Conservative treatment modalities can enhance cosmetic outcomes in certain subjects. As retinoids are efficacious in treating acne, the agents can be administered in nevus comedonicus. Application of topical tretinoin produces limited outcomes. Application of topical tazarotene as monotherapy or in combination with topical mometasone furoate or calcipotreine can produce superior outcomes in nevus comedonicus9. However, lesion resolution is incomplete and relapses are frequent with topical applications. Oral retinoids such as isotretinoin are ineffective in majority of instances although are beneficial in disseminated, systemic inflammatory variants. Topical adapalene and systemic or topical bexarotene can be administered, although the outcomes remain undetermined9, 10.

Interleukin 1- alpha inhibitors are classified into receptor inhibitors such as anakinra and monoclonal antibodies against the interleukin molecule and can be adopted for treating nevus comedonicus, although the outcomes are insufficiently detailed9, 10.

Administration of gamma- secretase, especially stimulators of aforesaid enzymes such as general control nonderepressible 2 (GCN2), a subunit of eukaryotic translation factor 2 kinase, can be contemplated as a future therapeutic option10.