A total of four different species of meliponine bees were encountered with Hypotrigona gribodoi being the most abundant species, followed by Meliponula ferruginea (black), Plebeina hildebrandti and Hypotrigona ruspolii in descending order. Occurrence and diversity of Hypotrigona gribodoi, Melipona ferruginea (black), Plebeina hildebrandti and Hypotrigonaruspolii was significantly influenced by the degree of fragmentation (vegetation type) and floral diversity (P = 0.0056); the mean number of colonies recorded per study site ranged from 2.3 in dispersed habitats in the lowlands to 1.0 in continuous forest landscapes in the highlands, whereas the mean population density ranged from 2.0 to 172 colonies/25 ha-transects.

The results provide substantial support to better understand interactions between habitat structure and the degree of fragmentation in linking species diversity to habitat loss.

Insect pollinators are the most important providers of ecosystem services globally 16 with an estimated 20,000-30,000 species worldwide; as they are also important indicators of biodiversity. They have co-evolutionary relationships with plants and therefore their services are inevitable for the maintenance of the life cycles of many plant species 17.

The structure of bee communities is closely related to the floral communities they forage upon with several key characters already identified, including floral diversity (Tepedino and Stanton, 1981; Gathmann and Tscharntke, 2002),18 floral abundance 6 and seasonal availability of these resources 15. Up until recently, some studies have attempted to quantify the combined effect of other structuring agents to the diversity of pollinators within a specified habitat 13. Such drivers have been identified to impact directly upon insect pollinator communities, while others impact indirectly through the modification and compositioning of floral communities or other forms of habitat structure. Bees are known to exhibit a diverse array of nesting strategies with respect to the type of habitat they are naturally occuring in, type of nesting substrate used, and the materials required for nest construction making them easily partitioned into several exclusive guilds on the basis of their nesting habitats 13.

While forage rewards provided by floral communities are generally accepted as the primary determinant of pollinator community structure, there is an increasing body of evidence suggesting that habitat structure may also play an important role in the occurrence of endemic pollinators such as meliponine bee diversity within any habitat 21.

It is widely acknowledged that habitat loss has negative effects on biodiversity and that the quality of suitable habitat in any landscape enhances species diversity. The effect of habitat fragmentation and isolation ranges on diversity of insect pollinators is less clear. Increasing isolation from naturally ideal habitats can be associated with either a decline or an increase in species composition, richness and diversity.

The Eastern Arc mountains has the status of a global biodiversity hot-spot (Pellikka et al., 2013; Adriaensen et al., 2006)1 and it lies in south-eastern Kenya at 03o20 S, 38o15 E, about 150 km inland from the coast and covering an area of about 250 km22(Figure 1). The hills are isolated from other mountainous areas viz the south-east (Shimba Hills), south (Usambara Mountains), south-west (Mt Kilimanjaro), west (Ngulia and Chyulu Hills) and the north-west (Kenyan highlands) by the vast plains of Tsavo 9. The annual rainfall is characterized by two rainy seasons (March- May, September – October) and varies between 480 and 1200 mm in the highlands 14, but much less rainfall (250 mm) (Figure 2) is observed on the surrounding plains of the sparse lowlands 11. 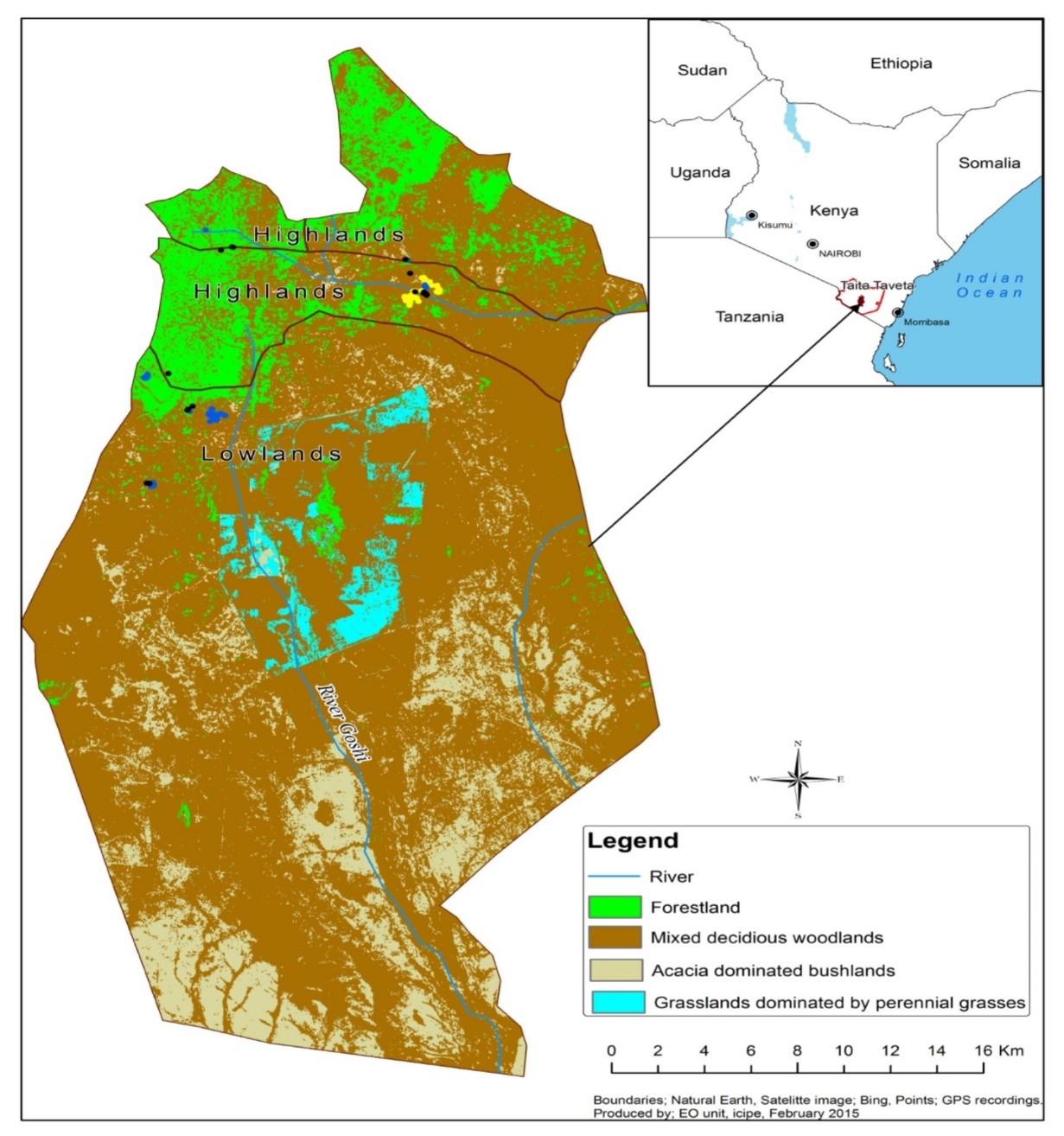 The eastern arc mountains are characterized by highly dispersed vegetation and fragmented habitats dominated by dry grassland plains (Table 1). The mean rainfall in the lowlands ranges around 400 mm with peaks in April and November every year.

The highlands are considered as high potential agricultural areas which are suitable for agriculture. However, a very small area is available for agricultural purposes due to steep slopes and shallow soils. A total of seven 7 forest fragments are found in this region, and characterized by continuous forest landscapes. Most forests (03°25'S, 38°22'E) are indigenous habitat situated at an altitude of 1,400 m measuring approximately 2 ha 22 and is regarded as part of remnants of the original montane forest, receiving 1700–2400 mm of annual precipitation. Tree species such as Lobelia gibberoa Hemsl, Phoenix sylvestris Sylvestris, Dracaena steudneri Engl. and Cyathea manniana L. are characteristic to this forest. Some isolated forests (03°28'S, 38°28'E) are mixed forest habitats comprising both indigenous and exotic tree species forming dense and continuous canopies, which has a reputation of being the most disturbed forest fragment out of most forest fragments. Tree species predominantly found in the highlands are cypress (Cupressus lusitanica), eucalyptus (Eucalyptus saligna), pines (Pinus caribea, P. patula), Maesopsis eminii and grevillea (Grevillearobusta) and Acacia mearnsii.

In each study site (25 ha), twenty [20) linear transects of 250 m x 20 m each were established using a GPS to mark coordinates with relation to habitat type and altitude. Transects were used as a basic sampling unit for all bees and vegetation data. In addition, the central line transect method was used to represent different habitats of the entire study area and also increase the chances of sampling nesting sites and vegetation types that dominate all study sites.

In order to obtain quantitatively reliable data, each line transect (250m) was divided into five separate sections of 50m x 20m each. The starting point for bee sampling was rotated (starting from the first point and ending at fifth point, then beginning at point 5 during the next sampling round) between the end points of the transects to randomize sample collections thus reducing bias in data collection. Surveys were carried out along four successive different habitats (forest, grassland, bush lands and woodlands); the sites were chosen due to the dissimilarity in habitat structure with key factors such as isolation, geographic location and micro-climates taken into consideration.

The belt transect method was used to sample foraging bees within a transect of 250 m x 20 m at each site, a total of six (6) sites were sampled. While walking in each transect at a slow speed, nest colonies of meliponine bees were observed on both living and dead substrates. Each sampling day, observations were made from 8:00 hr to 5:00 hrs (9 hours) to encompass the main flowering periods (Figure 3) and peak foraging hours. Observations were made under conditions favorable for bee flights, characterized by sunny weather, weak wind and maximum temperature from 9: 00 hr to 5: 00 hrs.

A total of four (4) different meliponine bee species were identified on the basis of morphological differences in the field (Table 2). The four species were determined at species level based on the descriptions from literature of African meliponine bee species 4. All the four species were recorded in all the habitats sampled in the lowlands. (Table 2). Hypotrigona gribodoi was the most dominant species across the two study sites (58.3%) of all recorded nests, followed by Meliponula ferruginea (32.0%). The proportion of Plebeina hildebranti (7.4%) and Hypotrigona ruspolii (2.3%) species revealed that they were the least distributed species. This indicates that all the four (4) species were highly dispersed in distribution across the three habitats (Mixed deciduous woodlands, grasslands and Acacia dominated bush lands) in lowlands sites. The species showed a rank abundance of 1 for Hypotrigona gribodoi, (2) for Melipona ferruginea, (3) for Plebeina hildebrandti and (4) for Hypotrigona ruspolii respectively. 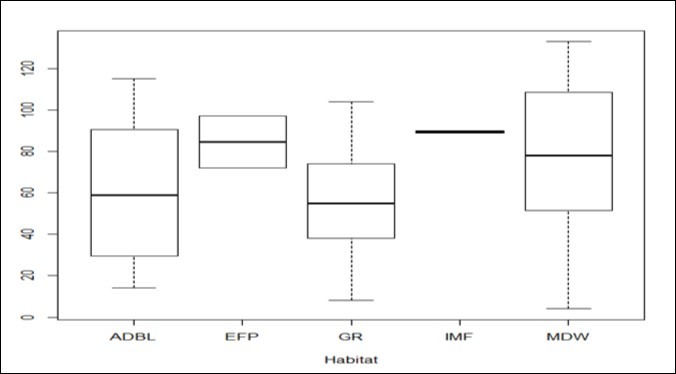 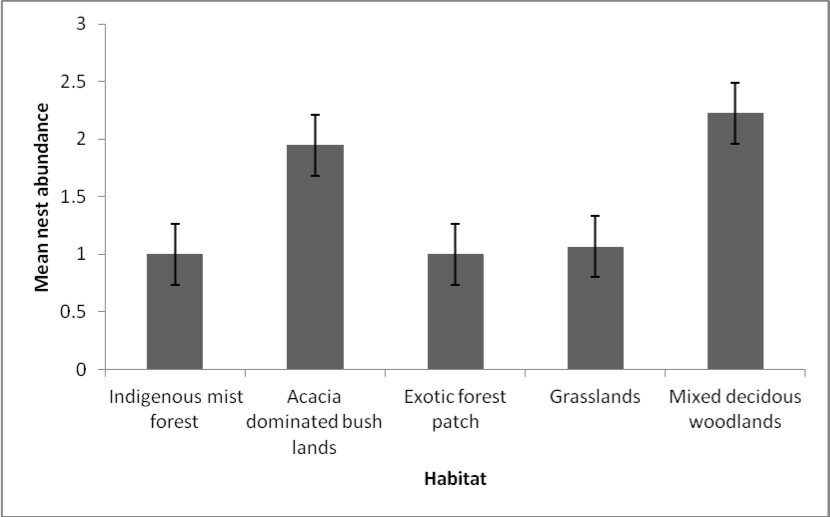 Figure 5b. Mean nests abundance across the two site types. 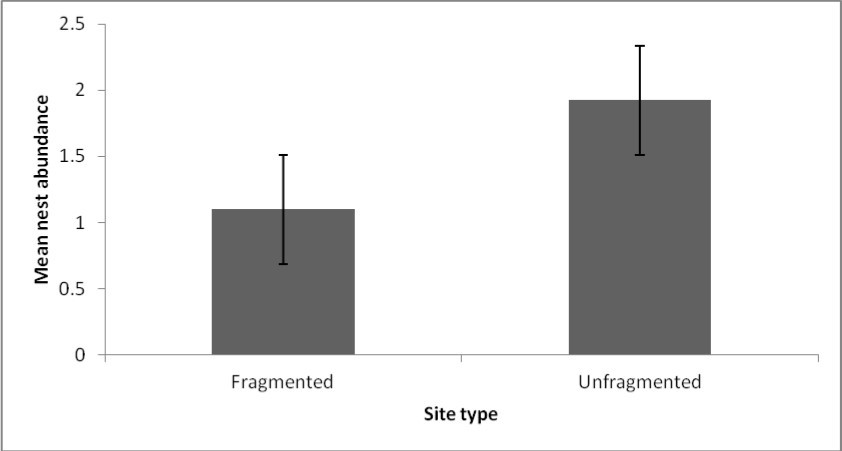 According to the Renyi diversity profile, a total of four species was recorded across the four main habitat types sampled and further extrapolation with Shannon evenness index also predicted a total species richness of 4.24 (Table 3). The species accumulation curve reached a plateau with about four species at exactly 80 sampling points (Figure 6). A comparison of species richness for individual habitats showed no significant difference in species richness (p = 0.08). The profiles indicate that MDW habitat was more diverse than ADB, GL, EFP and IF habitats in descending order. The EFP and IMF could not be adequately ordered, as the profile curves overlapped. At the α = 0 scale, IMF habitat overlapped EFP habitat, at the α = 1 (Shannon index), species diversity was ranked in sequential order MDW>GL>ADB> EFP>IMF, at the α=2 (Simpson index) species diversity showed the same pattern for the three (3) dispersed habitats in the lowlands. Shannon diversity extrapolation for each habitat predicted more species in mixed deciduous woodlands and grasslands than for other habitats. 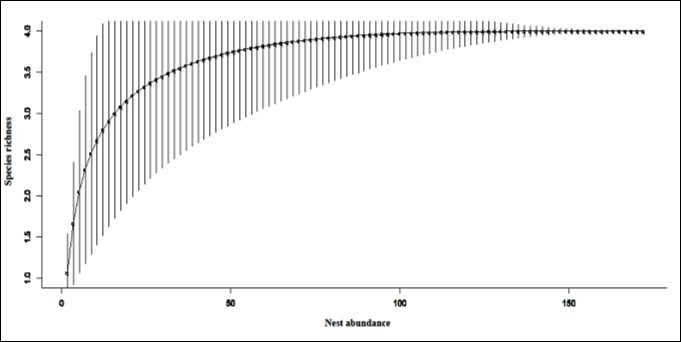 Species number recorded in all sampled sites indicates the composition of meliponine bee species within this hotspot, though this is comparatively less than the species recorded in Kakamega, it unmistakably signifies the effects of habitat fragmentation in determining species composition within an ecosystem5. The majority of H. gribodoi species was more dominant and featured in all habitat types but at variable proportions, which may be attributed to its plasticity in nesting in varying habitat types.

The four species recorded directly from sampling are close to the J Evenness extrapolated predicted value of 4.24. The species accumulation curve indicated approximately 80 sampling points as adequate to recover at least four species.

The species accumulation curve clearly distinguished habitat types that share similarity in species diversity. The habitat types with IMF and EFP were in the same group, while MDW and GR formed a divergent group from ADBL, both indicating similarities and close proximity to each other for habitats (dispersed habitats in lowlands) in the same group. Similar trends were noted in box plots with respect to habitat type (Dispersed lowland habitats) showing higher variation than continuous forested landscapes of the highlands, implying greater heterogeneity in dispersed vegetation in lowlands and uniform homogeneity in continuous forested landscapes in highlands. The study has shown greater species diversity in certain habitats with more deciduous tree species that are indigenous to this habitat and could thereby predict the richness and diversity of meliponine bee species.