The Open Access Pub has the reputation for quick reviewing and publishing original research articles. The editorial boards of our journals have many dedicated and reputed scientists as editorial members. Their support helps many researchers from all countries to enhance their research between scientists of various communities. This platform plays a crucial role in promoting science networks and exchanges. 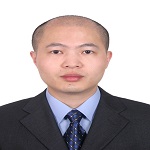 pathogenesis of gastrointestinal cancer, hepatitis, hypertension, and the therapeutic intervention in these diseases with traditional Chinese medicine, along with the delineation of the underlying mechanisms for Chinese herbal effects.

Dr. Haibo Xu is a professor in the department of pharmacology, school of pharmacy, at the Chengdu University of Traditional Chinese Medicine (TCM), Sichuan, China.

From March 2004 to February 2007, Dr. Xu was a postdoctoral research fellow in cancer biology in the department of surgery, centre for cancer research and cell biology, Queen's University Belfast, UK, followed by another over 3-year research on hypertension in the school of physiology and pharmacology in the University of Bristol, UK.

Dr. Xu has been holding several research grants as a principle investigator in China, with 40 published papers and 6 oral presentations in international conferences.